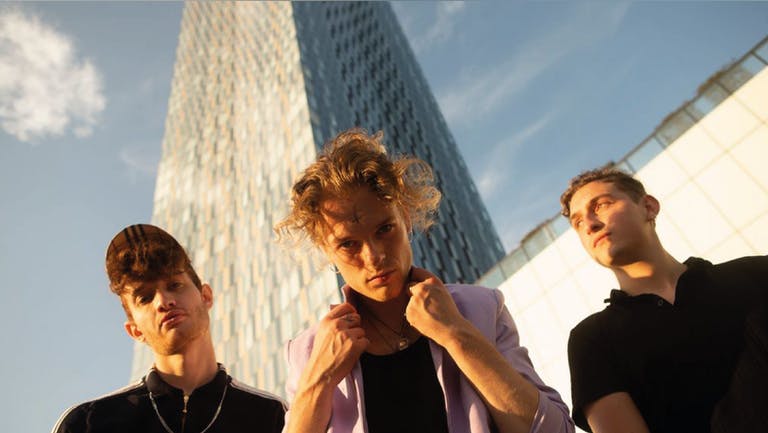 Dynamic alt-pop trio King No-One have taken the live scene by storm. Originally hailing from York, the band built up their live reputation with one blistering sold out show after another across the nations favourite small venues. After being received strongly in Manchester they decided to move into the heart of the city, and soon after, exploded as one of the biggest live emerging guitar bands in the country.

Impressively the band sell out venues reserved for major label, radio 1 play-listed album artists - selling in excess of 8,000 tickets over two UK tours, every year. Their biggest show being their headline at O2 Ritz in Manchester.

The band go from strength to strength from sold out UK tours, BBC Radio 1 stage appearances at Reading and Leeds, main stage performances, drawing thousands of fans, to the likes of Truck and Y-Not festival, TRNSMT and Tramlines. With huge turn out appearances at Dot to Dot Festival (O2 Ritz, Bristol Academy and Rock City). The band charted their debut EP in March 2019 and reached #2 on the Indie breakers chart and #21 on the Indie Chart following playlist additions on Spotify and Apple Music including ‘New Music Friday’, ‘The Indie List’ and ‘Best New Bands’

Since the beginning of 2020, King No-One have burst out of the blocks with two fresh new records debuting them with a virtual performance at Radio 1’s Big Weekend. Since the performance they have had heavy radio support from BBC Introducing nationwide and streamed a live set featured on BBC Look North.

Through pure grit, talent and drive King No-One epitomise the modern go-getting DIY culture - conquering the hearts and minds of a huge fanbase with constant touring, massive singles and an ethos of equality. This was characterised in the single ‘Antichrist’ which declares that regardless of our colour, gender, sexuality or our financial status; we are all born equal.