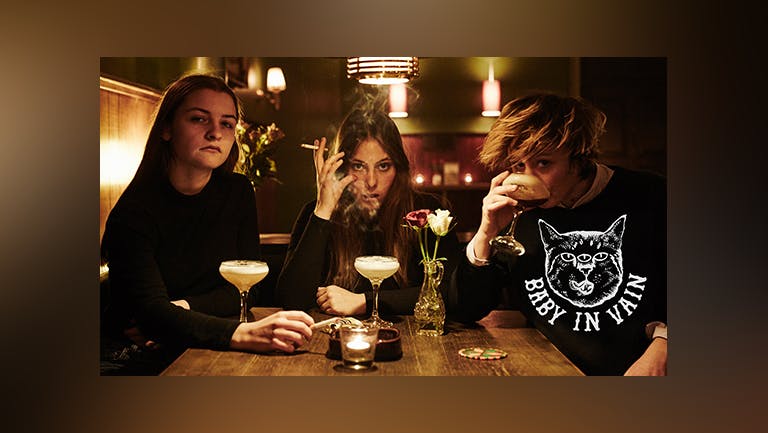 "Lola Hammerich (vocals/guitar), Andrea Thuesen (vocals/guitar) and Benedicte Pierleoni (drums) are a trio not to be messed with. Making rumbling rock and grimy grunge that’s as malevolent as a midnight knife fight, their sound is equal parts Kyuss and Sleater-Kinney, with a dash of Babes In Toyland for extra punch.

Baby In Vain are not your typical Scandinavian indie band. Drawing on the gang-mentality and bluesy swagger of Black Rebel Motorcycle Club and Queens Of The Stone Age, they’ve been together six years, but are still quite young; Lola’s 19, Benedicte is 21 and Andrea 22. Their early material saw them producing their own twist on stoner-rock, but over the past five years they’ve branched out into much broader territory, pulling in the industrial menace of post-punk alongside fuzzy expeditions into the fringes of doom and garage punk.

The three met at a mutual friends’ prog-rock’n’roll gig in their native Copenhagen back in 2010 and formed the band on the spot, with Andrea naming the three-piece before they’d even left the venue. Their first rehearsal came a few days later, at a local afterschool youth centre. “Lola and me both wanted to be shredding some cool guitar solos,” explains Andrea of their decision not to enlist a bass player – something they’ve stuck by, instead achieving their booming deep end by cunning use of bass amps and layering guitar sounds. The pair also split the vocals, meaning there’s not one, but two dynamic frontwomen heading up  Baby In Vain’s killer live show. “It’s just because it was a faster process when writing the songs,” states Andrea. “When we started playing there were a couple of songs that Lola sang, but then I came up with a song. Whoever wrote the lyrics would sing that track.”

Baby In Vain  put out a handful of singles in 2013 as well as touring heavily, but wisely decided to scale things back, instead of blindly jumping into the murky waters of the music industry. It’s a period of time that the band acknowledges on their For The Kids EP, in the sludge-ridden ‘Worthwhile’. “It was very overwhelming being ‘up and coming’ and hyped,” explains Andrea. “People wanted all these things from us, and there was a lot of expectation. I felt this pressure, going from being a rehearsal room band to being a completely different thing. ‘Worthwhile’ is about how that kind of sucked.”

The EP also features ‘Martha’s View’ – corrosive clatter about a sinister OAP the band met in a bar – as well as the blues-based brutality of ‘Muscles’, which Benedicte matter-of-factly says is about “selling your house and your kids and then doing some drugs and then selling some drugs and writing huge hits.” And if that sounds up your street then be sure to check out the song’s fantastically bizarre video. Described by Noisey as “Rocky Horror meets Spring Breakers”, it sees the trio holed up in a Danish castle with oysters, champagne, a topless bodybuilder and their fertile imaginations. Elsewhere, the crawling ‘The Urge’ – which started off being about a serial killer and ended up being about cheating on your lover – proves Baby In Vain are just as adept at subtlety as they are at sledgehammer riffs. EP closer ‘Jesusfreaks’ is utter evil from start to finish, seeing the son of God murdered by the mafia and dumped in the ocean. “It’s about a night where you lose control,” says Lola.

Baby In Vain’s addictive, aggressive sound has received plaudits by everyone from Thurston Moore (“It was really a pleasure to play with Baby In Vain tonight. It’s always good to see new, young energy on the stage investigating all the heavy, new rock action that is out there.” he gushed) to Alison Mosshart of The Kills, who handpicked the band to join them tour not once, but twice. “We were the chosen ones,” smiles Benedicte of their US jaunts with the grind-rock icons.

After half a decade of gigging, they’ve now got their frenetic live show down to a fine art. 2017 looks set to bring with it more gigs, more music and more madness. “We’ve going play a lot of shows,” explains Andrea, before Lola adds perhaps the most important part of all. “And party.” she says."