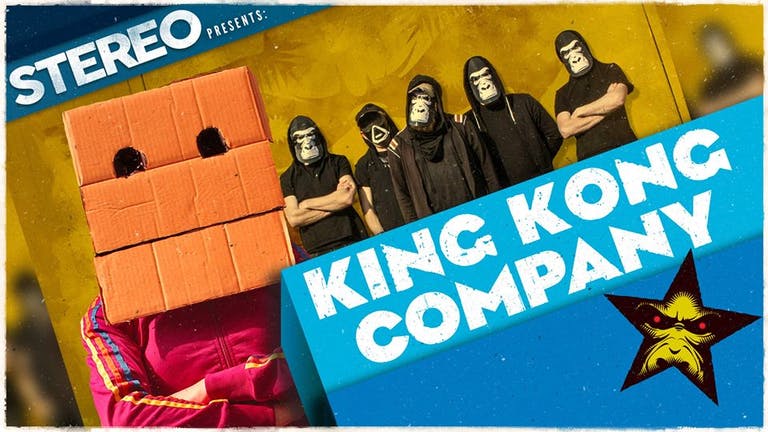 STEREO is Bath’s Live Rock & Indie Club Night where you can expect to see future stars on the cusp of being the next big thing!

Straight after the the bands every week, the Stereo DJs play the biggest in Indie Rock & Festival Anthems till 3am!

"After entertaining the masses over two nights at Electric Picnic King Kong Company have announced an Autumn tour that includes dates in Dublin, Cork, Limerick, Galway Kilkenny, Waterford and Tullamore.

Critics and fans have been raving about King Kong Company in blogs, in tweets and in the fields of Irelands biggest festivals. The seven piece who sound more like a DJ than a band, have been described as BRILLIANT (TheSkinny.co.uk) INCREDIBLE (State.ie) and, not to overuse the word; BRILLIANT by Goldenplec.com. Just this summer they played to packed fields at Castlepalooza, Vantastival, Body & Soul (where they filled the mainstage at lunchtime), Phase One, Barndance, at Belfast’s Sunflower Fest and two shows at this year’s Electric Picnic. The first was a surprise slot on the Body & Soul stage (where the promoters took to Twitter to say they “tore up the mainstage”) the second was an end of festival set on The Salty Dog stage on Sunday night. Let’s just say that ship was well and truly wrecked by the time they were finished with it!

King Kong Company burst onto the live scene just two years ago. Having been holed up in a studio releasing one music video every month for the year before that. They had intended to only play one gig in their hometown of Waterford, but when 700 people showed up to it, that put paid to that notion. Fast forward two years later and the band’s manic live shows have seen them become one of the most talked about live acts on these shores.

This tour includes their first Dublin date in over 18 months at The Sugar Club and tickets will be going on sale on Monday September 15th. To get your King Kong Company fix in the meantime, check out all their tracks on Youtube and Soundcloud."

→ After the Live Music, our weekly resident DJs will be blasting through all the biggest Indie Rock & Festival Anthems till 3am!

+ Check out the HUGE Moles Shot Menu including our legendary SCORPION SHOT (including a REAL scorpion!)

• Tickets on sale Friday Sept 1st at 9am.