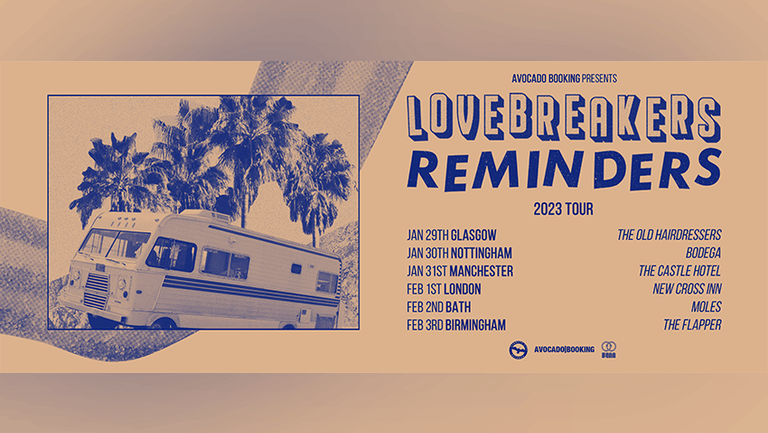 Lovebreakers
www.facebook.com/LOVEBREAKERSband
"LOVEBREAKERS, formed in Birmingham, UK are Jack, Christian, Chino and Nathan. In July 2018 they released their debut EP generating great reviews as well as a cover of The Who’s “Baba O’Riley” which was hand-picked by Billie Joe Armstrong (Green Day) for his “Oakland Coffee” Spotify playlist. Fast forward to March 2019 and LOVEBREAKERS flew out to Los Angeles to record their debut, full-length record at Hurley Studios in Costa Mesa with Davey Warsop as Producer/Engineer.

Their debut record “Primary Colours” was released in June 2021 to rave reviews. Sonically, like a blur of The Ramones style energy and melody with a dark, gritty story teller nature akin to Elvis Costello or The Clash. ‘Primary Colours’ is just that, a wash with brightness and contrast, the songs vibrant nature jumps from the track and into the listeners ears, heart and mind. The confidence and song writing ability is that of a band so much older and with a lot ‘more’ under its belt. Their single releases Horizons, Family Man and Laura all had radio support from BBC Radio 1 (Jack Saunders), BBC Radio 6 (Steve Lamacq), Radio X (John Kennedy) and Sirius XM (Rodney Bingenheimer/Kelly Ogden).

Reminders
"Reminders approach punk rock from where they know it best: the forgotten British seaside. Formed as teenagers on the Isle of Wight, they coined their sound ‘beach punk’; a tongue in cheek ode to the songs written a stone's throw from the beach.

Since then, Reminders have honed their breakneck but bubblegum trademark — a pop-tinged punk band. Between BBC Radio 1 & 6 Music airtime, Spotify & Apple Music playlist placements & signing with two of the most exciting punk-focused independent record labels either side of the Atlantic, it seems clear that something born from a tired seaside town is ironically energising — if bitter & jaded in equal measure.

With that said, Reminders’ debut full length “Best of Beach Punk” is out now & is half an hour of heartfelt power pop chaos; a snapshot of the bands formative years.

“A ripper that channels sounds from all throughout punk history” - BrooklynVegan

"On a take-no-prisoners assault" - BBC 6 Music