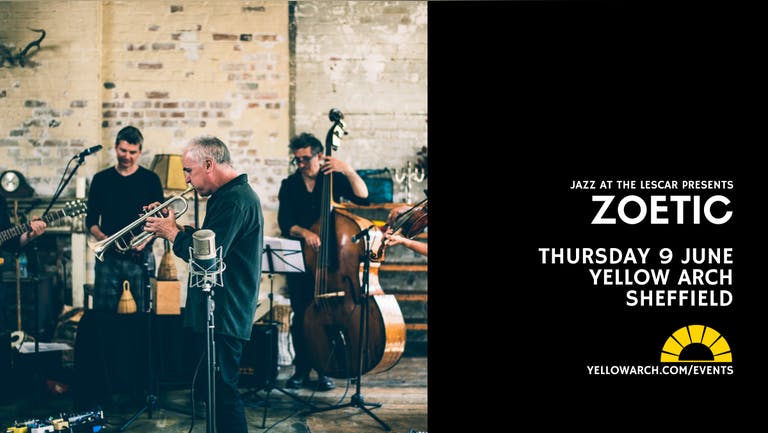 Jazz at the Lescar Presents: Zoetic

“This was music that slowly and subtly drew the listener into its web…..mesmerisinginterlocking patterns that both engaged the listener and fired the imagination ofthe soloists…a genuinely beautiful and moving performance”  TheJazzMann.com
A founder member of member of Loose Tubes, Chris Batchelor has shared the stage with many leading international stars, including Hermeto Pascoal, Michael Brecker, Uri Caine and John Taylor, as well as leading the band Pigfoot.
“A fine trumpeter who intriguingly blends Miles Davis’ shrewd pacing and evocative long-note sounds with something of Harry Beckett’s bubbly phrasing.” John Fordham, The Guardian
On viola, Margrit Hasler had an extensive career in classical music working with top conductors such as Solti and Haitink, alongside playing jazz with Mark Lockheart’s Ellington In Anticipation and recording with Paloma Faith.

“The burnished legato and glacial harmonics of viola player Margrit Hasler.” Peter Quinn The Arts Desk
John Parricelli was also one of the founding members of the British big band Loose Tubes. He has worked with Kenny Wheeler, Lee Konitz, Charlie Haden and Paul Motian.

“He’s a sensitive and versatile player who provides excellent support. His delicate touch, tasteful harmonic sensibility and rhythmic ease are responsible for setting much of the mood” Ian Latham BBC Music
Steve Watts has been a key figure in many bands on the British scene for years, and is one of the most sought after and creative bassists around. He has worked with Kenny Wheeler, Joe Lovano, Kirk Lightsey and many more.

“Steve Watts on bass gives a solidity to the pulse reminiscent of Ron Carter at his stentorian finest.” LondonJazzNews.com

Paul Clarvis is instantly recognisable for his sparky and idiosyncratic style. He’s worked with everyone from Stevie Wonder and Nina Simone to Harrison Birtwhistle.

“Clarvis’ fluid and creative brushwork had every bit of the infinite subtlety of a Joey Baron or a Paul Motian.” LondonJazzNews.com

This tour is supported by Arts Council England, and we’re really grateful that this enables us to present this wonderful group of musicians in Sheffield.