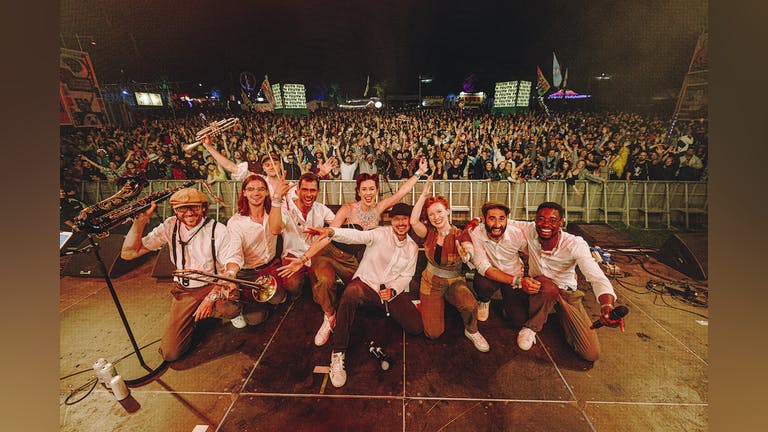 Mista Trick Collective, a high-energy 7-piece swing & bass band, are excited to announce their debut UK tour, launching in February 2023. Tickets are on sale now. A full list of dates can be found below.

The band is founded by Bristol based DJ, Mista Trick, who is at the forefront of the swing & bass scene across the UK and Europe, and instrumental in developing the popular Swing & Bass record label and club nights in London. After mixing live elements into his remixes, introducing impressive musicians, rappers, and vintage swing vocalists, Elle & The Pocket Belles, the Mista Trick Collective was born.

This musical fusion is in a league of its own, taking swing & bass to the next level. Mixing vintage, vaudeville vibes with distinctly down and dirty drum & bass, the resulting sound is like the lovechild of a wartime knees-up in an underground rave! The ‘Do What You Do’ tour, follows the release of their debut album ‘You’ in 2022, where Mista Trick took on the challenge of creating his own original tracks with a collection of artists. The album has seen huge success, including tracks: ‘Do What You Do’ featuring Kathika (AKA Kathika Rabbit) from Slamboree, ‘About to Blow’ featuring guest vocal performances from Tenisha Edwards and Blackout JA, and ‘Drive’ featuring long-time collaborators Elle &The Pocket Belles.

Mista Trick’s remix of Smile by Lily Allen went viral on Tiktok and has had over 2 million plays on youtube and 1 million plays on soundcloud. After a packed summer 2022 festival tour, including Glastonbury, Boomtown, Wilderness, Shambala, Secret Garden Party, and Camp Bestival amongst others, the ‘Do What You Do’ tour promises to bring the Mista Trick Collective signature sound and engaging stage presence to a city near you.

The tour kicks off in Norwich on 25 February, making stops in cities including London, Oxford, Bristol, and Leeds. Don’t miss out, grab your tickets now.