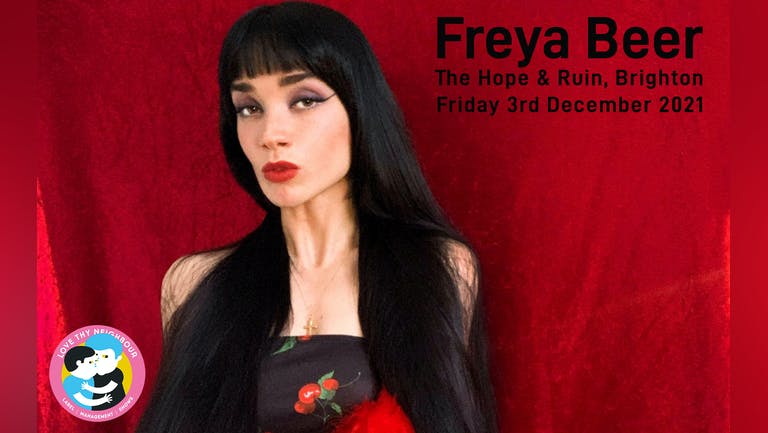 Hailed as “a raw and thrilling new talent”, Freya Beer is a singer-songwriter from West London. Inspired by art and literature, alternative fashion and music, Freya distils her disparate influences through a gothic soul and devil-may-care spirit that dares to dream in the darkness. Sparking a wave of attention from the get-go with her self-released debut single “Bike Boy” in 2018, its immediate follow-up “Six Months” saw Freya earn a BBC Introducing Live Lounge Session and a feature on Tom Robinson’s BBC Radio 6 show.

With the wind in her sails, Freya launched her own label Sisterhood Records in 2019 as a vehicle to further her creativity. In February 2020 Freya released the single “Dear Sweet Rosie”, a track recorded in Manchester with accompaniment by I Am Kloot’s Andy Hargreaves on sonic drums. Drawing on her literary influences like Allen Ginsberg’s ‘An Asphodel’ and Anna Sewell’s ‘Black Beauty’, the track went on to receive further incredible support on BBC 6 Music and many rave reviews. Marc Riley awarded Freya a live session on his BBC 6 Music Show (which was then highlighted as one of his “Best of the Year” in December), whereas renowned music critic John Robb hailed her as ‘New Artist of the Day’ and even predicted a Mercury Prize in years to come.

Revealing her many shades with a series of exquisite cover versions throughout the year, Freya bookended 2020 with the critically acclaimed single “Arms Open Wide”. Loosely inspired by chiling atmospheres of ‘Tubular Bells’, the track saw Freya earn further support at BBC6 Music too, with PRS for Music placing the single in their Top 20 songs of 2020.

With a fearsome live reputation to her name already, Freya has impressed as a special guest to the likes of Brix & The Extricated, BMX Bandits, Kristeen Young, and John Cooper Clarke. With a SOLD OUT UK promo tour curtailed as a result of the 2020 pandemic, Freya is eager to spread her wings on the live stage in the months to come, with a UK tour already planned.

Deftly mixing poetic lyricism with a dark mystique all her own, Freya Beer will deliver her much anticipated debut album: ‘Beast’ in 2021.