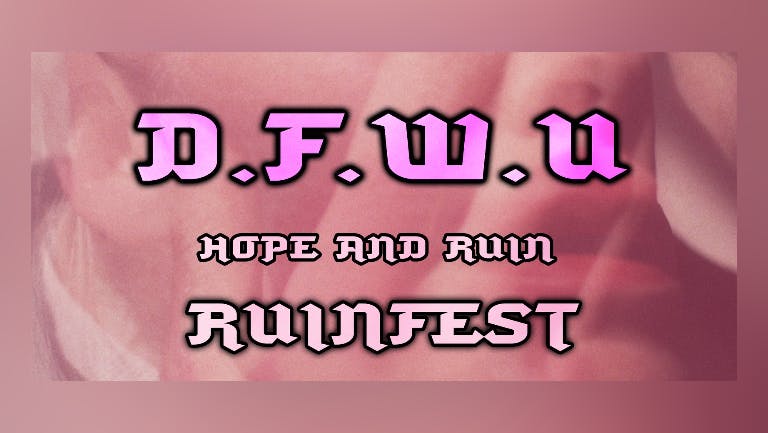 D.F.W.U X RUINFEST
Yeeeeah that’s right bay bay, Annie (Clt Drp) & Lucy (PROJECTOR / O Hell) are taking the reins of the next ruinfest to bring you one hell of a line up featuring:

Lambrini Girls
“The best band in the world. Imagine your nan is in the boot of your car with a croissant in her mouth and hears Bikini Kill for the first time. That could be you, it will never be us as we are not Bikini Kill and we are not your nan. We are Lambrini Girls. Bon Appetite.”
"Raucously untamed feral punk, a frenetic and fiery blast of thrashy mayhem that takes no shit" - GIGWISE

o hell
o hell cut their teeth as a songwriter and musician, touring and recording with uk alt bands and as a live guitarist/ bassist for international touring acts. across 2020, drum machines and recording software began to offer them a new sonic autonomy. o hell is the outcome.

Slap Rash
Known and nurtured in the Manchester music scene, SLAP RASH's relentless live performance has been turning heads.  Their blend of “machine-like blasts of drum work”, roaring bass and brooding synth has led to them opening for the likes of JOHN (TIMESTWO), LICE , and selling out shows at The Eagle Inn and Castle Hotel.

Muff
Are the Brighton based epitome of feminist punk rock. With their diverse range of influences from the Riot Grrrl scene, it's no wonder they are capable of filling any local music venue. Whilst Anna provides dirty thick riffs, lead vocalist Jade brings grit and attitude through her confidently shouted lyrics. Chloe and Pip reinforce the contemporary band's 'take no shits' character with a pounding rhythm section.

Deuxes
Deuxes are a soul/indie duo of sisters from North West London. The pair are described as having a sound of their own, featuring a mixture of bold bass-lines and soulful harmonies with influences from Motown to modern rock. Often referred to as ‘gems of the underground music scene’ the girls are building momentum following their new single release ‘Genesis’. Expect to be transported away with hypnotic guitar riffs and roaring vocals!

Slug Puppie
Indie-Punk duo from Bristol. Dance away your party anxiety: your one stop shop for energetic and relatable anthems carried by huge riffs and slimy drums. Come get sluggy.

Anknee
Following a string of shows that have left Brighton audiences enraptured, Anknee’s reputation as a must see singer-songwriter is growing by the day. Her brand of delicate, honest and soulful storytelling draws comparisons with a stripped back Julia Jacklin, but her lyricism - full of illustrations of life’s everyday beauty, melancholy and connection - is entirely her own, and stunning to behold.

Plus DJ's, talks and great flavours