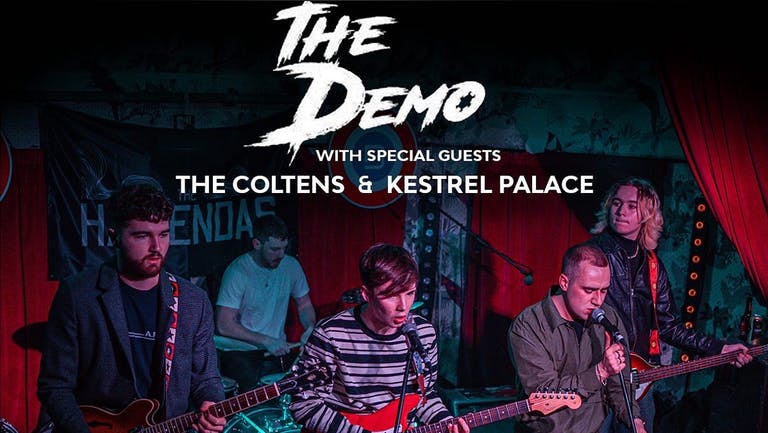 The Demo + Kestrel Palace + The Coltens

The Demo + Kestrel Palace + The Coltens

The Demo, a 5 piece rock band hailing from Middleton Manchester. We have been playing live for almost 3 years and are focused on improving our songs, skill set and live act as we move up in the industry.
We had all been playing our instruments prior to forming the band, except Nathan who basically picked up the bass guitar when we started playing together. The main influences at the moment are kings of Leon and the strokes. We like that early 00s rock sound from both sides of the Atlantic so we're trying to channel that but make it our own.

Kestrel Palace is a solo artist, singer-songwriter from Manchester. He has a vibrant sound of indie/rock and alternative which is also really encapsulated by his thought provoking lyrics. Through growing up in Manchester, he has favoured bands such as Oasis, Stone Roses and Joy Division swell as other northern bands like Arctic Monkeys.

Being born in the earlier naughties, he is a young prosperous artist who is self sufficient in writing clever lyrics and music and has a lot more to come in the future

The Coltens are a 3 piece indie rock bank from Manchester. They have the tonal mashup of 90’s abrasive rock with 2020’s indie crowd pleasers, a real Manchester feel. With extreme guitar solos and catchy tunes the Coltens are one of those bands you never knew you needed or appreciated until they were put in front of you to enjoy.