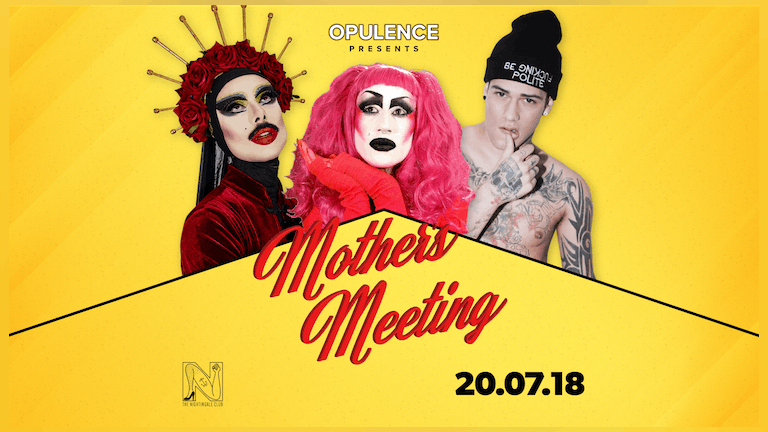 “Opulence is a real diverse bunch of queens. We have theatre
queens, comedy queens, deathdrop queens, the lot.

We plan to showcase the best of U.K drag in Birmingham, as well as other styles of
performance. You just wait to see who we have for Mother’s Meeting part
two.”

Mothers Meeting is back again after the success of our debut show, but this time we have THREE special guests to annouce aswell as performances from your Opulence queens, Jenna Davinci, Dahliah Rivers, Jay Andre, Yshee Black, Nora Virus and DJ set from Elliott Barnicle.

The event will be hosted at The Nightingale Club on Friday 20th July.

Virgin Xtravaganza, usually residing in London, this international “Mother Of Gawd” has brought their act to several countries and will be bringing their act to Mother’s Meeting. Mixing comedy, clever song parodies and high fashion imagery.

Twiggy, is a lip sync legend, Who has been entertaining the U.K for years and was at the first Birmingham Pride. Hilariously controversial, his performances won’t be one you’ll want to miss.

Drag duo “Cocktail Sausage” is made up of Petite and Pork Pie. Pork Pie often found entertaining the crowds as a resident at The Nightingale and Petite was a finalist of “The Church Of Yshee” lip sync competition and talent contest “Star On The Rise”. Together they’re a hilarious duo and we can’t wait to see what they have in store.