This event has already happened! Click here to see upcoming events from Music As Medicine 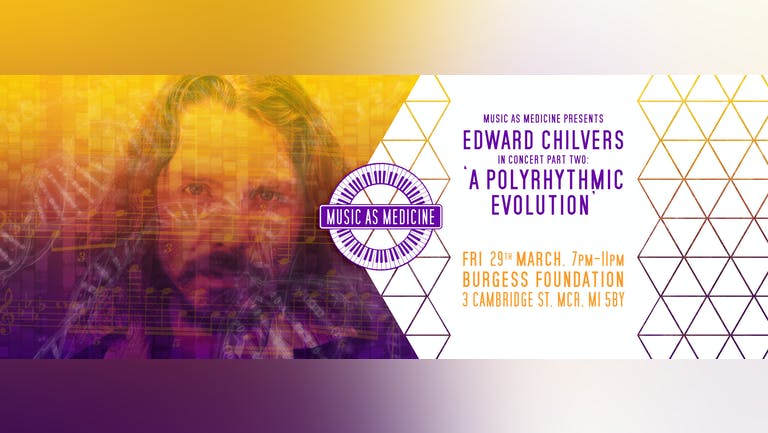 By Music As Medicine

After his sell-out concert last year, unique multi-instrumentalist and composer, Edward Chilvers is back at the first Music As Medicine of 2019.

Chilvers is one of the best-kept musical secrets in the UK. A pianist who’s studies of polyrhythm have resulted in the astoundingly dextrous and beautiful album ’12 Etudes’.

A Young Steinway artist who began playing at the age of 4, Edward draws inspiration from a myriad of influences; from Bach, Wagner and Beethoven through to Aphex Twin, Squarepusher, Radiohead and Meshuggah. However the Bwiti music of Gabon, West Africa, with its’ incessant, intense use of polyrhythm via harp, voice and drums drums influenced Chilvers to seek to stretch the capacity of what is humanly possible to play on the piano.

‘The idea (of polyrhythms) is to to create a multi-dimensional impression, music happening at different speeds pulls your mind in different directions. It’s the way they (the rhythms) relate to each other and link with each other that i’m interested in.’

Edward’s musical explorations are constantly evolving and we’re excited to bring him back to showcase his recent work; polyrhythmic systems working harmonically with 96 modes to create unique improvisations in the moment. No other composer in the world is doing this (or none that Eddie has yet discovered).

‘Everything interesting in the cosmos dances along that turbulent line between order and disorder. Comprehensible and Incomprehensible. Same and Different. Old and New. Music strives to represent the character of the universe. As above so below on every level and in every dimension.’

THE VENUE: The Anthony Burgess Foundation is an independent educational charity that encourages interest into all aspects of the life and work of the Manchester born author and composer. Chilvers will be performing on Anthony Burgess's own Bosendorfer piano.

There will be a Q&A session with Edward between 2 sets of music.

In this TED Talk, Eddie talks of why Polyrhythm is the inevitable future direction of music

Watch Eddie’s recent 5 part video series on ‘Polyrhythmy and the Future of Music.’

Listen to samples of ‘12 Etudes’ here.