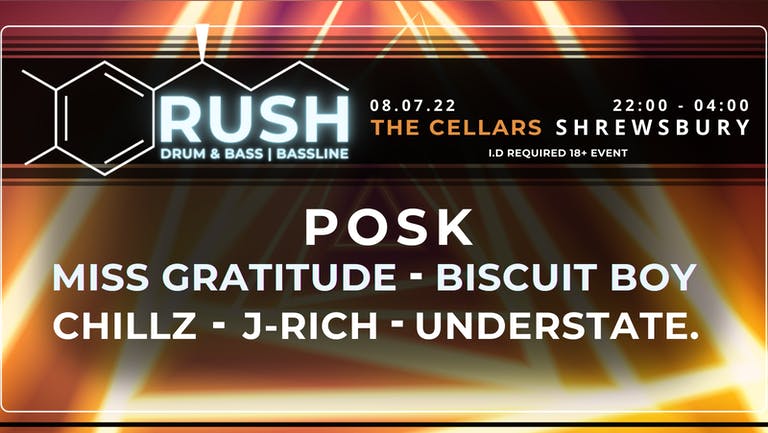 RUSH return for their 5th instalment of the year and this time it’s a full D&B takeover featuring one of the West Midlands hottest talents right now, Posk!

Warwickshire based Posk has been making waves in the scene over the last couple of years, accelerated by his recent EP ‘Lettin’ it Off’ on Invicta Audio which has been destroying dancefloors across the UK!

Joining us from Worcester, up & comer Chillz has been climbing the rankings and increasing her profile across the West Midlands and we are gassed to have her join us for her Shropshire debut!

Following an incredible set at the first RUSH back in January & Subvert in April, Seshlehem’s very own Miss Gratitude will grace the decks in The Cellars for a third time this year.

Shropshire & Wales regular J-Rich surely needs no introduction, known for his love of dark & minimal rollers, if you caught J-Rich at Subvert’s February event with Break & SP:MC you know that he is sure to bring the heat.

Another second RUSH booking for Biscuit Boy, hot off the back of his set at Dazed in Prague, expect a selection of high energy dancefloor D&B from one of Shropshire’s most exciting up & comers.

Subvert resident Olly Ruggles AKA Understate. joins us for another RUSH debut! Known for a love of all things dark and minimal, you can expect some Critical Music vibes from this set.