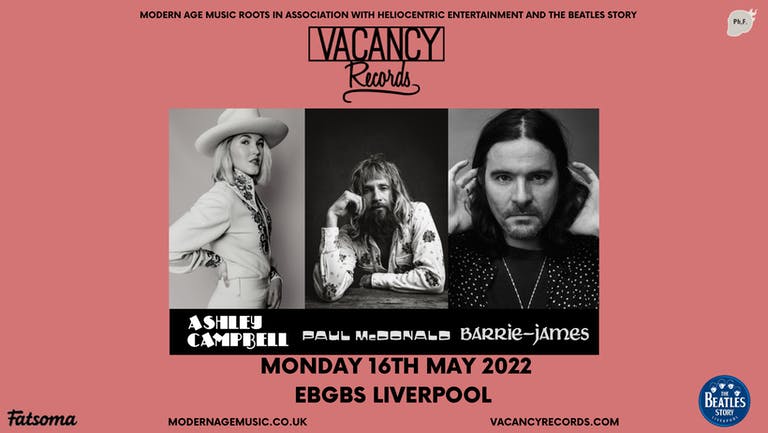 is delighted to announce her second album ‘Something Lovely’, released by
Vacancy Records in the UK, Ireland and Europe on 9 October 2020. The follow up to her 2018
debut ‘The Lonely One’ finds her once more in assured form, the weight of one of the biggest
names in Country Music seemingly no burden to her. Though very much her own woman, with
her own style, the undeniable influence of her father is given a classy nod by the album’s cover
which features her sporting a former Glen Campbell stage outfit that fitted her like a glove
unaltered.

The album features twelve new tracks, including the forthcoming single and also album Title
‘Something Lovely’ On the 28th August with Pre-Order for the full album also available then. The
follow up single ‘If I Wasn’t’ featuring Vince Gill which will be released 18 September. Ashley
Campbell’s hard-wired musicality, clarity and easy lyrical delivery gives this collection a classic
feel but the songwriting and production are right up to the minute. She’s also an accomplished
musician contributing both guitar and her trademark banjo to this album; the ‘Moustache Man’ is a pacey instrumental.

There’s an eclectic range to this album, from the woozy appeal of the likes
of ‘Forever’s Not That Long’ (which sounds like it could have been delivered by Glen) and ‘Walk
On By’ to the ‘Western Waltz’ feel of ‘Moonlight’. The album finishes with a stylish take on the
Beach Boys’ evergreen ‘Good Vibrations’.

The youngest of the eight children of Glen Campbell, Ashley was perhaps always destined to
perform. Taking the stage first as a comedian, her debut single was ‘Remembering’. A new version
of the track is included on ‘Something Lovely’ and the song also featured on the soundtrack to
the ‘Glen Campbell: I’ll Be Me’ documentary the compilation won a Grammy and was
nominated for an Oscar.

No stranger to the UK, Ashley Campbell appeared on several ‘pop up’ stages at the 2016 C2C
Festival in the UK, graduating to the main stage for the 2018 event and also at the 2017 Nashville
Meets London Festival. Indeed ‘The Lonely One’ album hit the Top Ten of the UK Country
Chart upon release.

A mature and confident set from a musician who has earned her place in the spotlight, ‘Something
Lovely’ from Ashley Campbell is just that - but there’s depth as well as the undoubted style.

- Barrie-James -
will release his third album ‘Strange Desire’ on all digital
platforms, CD and Vinyl through Vacancy Records. This album will see Barrie-James take on a new light with an
Alternative Country vibe. ‘Strange Desire’ will also feature the stunning track ‘Riverside’ which features Lana Del
Rey. Barrie-James’ connection with Del Rey goes back years. In 2013 he recorded a duet with her of the Lee

The album also features Ashley Campbell, daughter of late great Glen Campbell on the track ‘Country 33’, which issteeped in the spirit of Johnny Cash and June Carter. The album will be preceded by the first single ‘Angry Man’ on8 October with Pre-order for the album also Available. Of the ‘Strange Desire’ album, Barrie-James says himself: “I hope to bring a melodic n meloncholic joy feeling to this
3rd album. And a style of simplicity type sound to my fans, and future fans.

The words and music are all inspired byfeelings of lust love and fear n hope. Universal type emotions. Vacancy and myself’s plan is to take this music worldwide. And to bring a different style and mood to the world of Country music”. Barrie-James cut his teeth in the Scottish music scene before heading to Los Angeles to further his horizons. One local LA tastemaker site said of him, “comparisons to the likes of Elliott Smith. Such parallels are not to be taken lightly, but it is apt here”. His first band Kassidy were formed in Glasgow in 2009 and went on to record two albums.

The band are marking the tenth anniversary of their first record Hope Street with a sold out show at Glasgow
Barrowlands in December 2021.
His career as a solo artist began in 2014 when he released his first single ‘Mary’ / ‘Paranoid’ under the name
Nightmare Boy, with a follow up EP ‘Hate’ featuring the track ‘Chivalry Is Alive And Well And Living In Glasgow’ [the
video for which was premiered by Pitchfork] coming the next year. His debut album, released under his real name,
was titled ‘Cold Coffee’ produced by Rob Schnapf (Elliott Smith, Beck) and landed in 2016, with ‘Psychedelic Soup’
following in 2021.

He may be keeping some fine company on ‘Strange Desire’, but this record is in truth all about Barrie-James
himself. This third collection sees not only a natural and compelling development, a further emergence of a
deftness of touch and an easily worn virtuosity. The roots of ‘Strange Desire’ lie in the best of the Country tradition
but with trenchant lyrics and a languid delivery, Barrie-James builds a beautiful but occasionally dark and wistful
atmosphere. This is an atmospheric and compelling collection that engages from the first moment.

will release an expanded deluxe edition of his 2018 solo
album ‘Modern Hearts’ worldwide through Vacancy Records which features two additional,
previously unreleased tracks ‘Just A Matter Of Time’ and ‘Bright Lights’. The album was
produced by Jordan Lehnning [Caitlin Rose, Rodney Crowell, Andrew Combs]. Paul joins his
good friend Ashley Campbell on the Vacancy roster, the label is based out of Glasgow and, whilst
you don’t have to have an historic Scottish clan surname to sign with them, it clearly helps. The
first single from the album will be ‘How Long?’ which will be released on 10 September when the
album will also be made available for pre-order.

Paul McDonald’s voice is immediately recognizable and impossible to ignore. He pulls off
the rare feat of being a proper songwriter, compelling performer, and a powerful vocalist.
Often compared to legends like Rod Stewart, Bob Dylan, and Tom Petty, the poetic story- driven narratives and deeply catchy hooks in his music are delivered by a raspy yet refined Voice reminiscent of another era yet that demands to be heard right now. Paul McDonald has packed plenty into his personal history already. “Making this record, it saved my life,” he told Billboard. “It got me through some dark stuff”. He also co-wrote and performed
on the song ‘All I’ve Ever Needed’ which featured on the soundtrack to ‘The Twilight Saga:
Breaking Dawn Pt 2’ OST and has over 6m plays on Spotify.

Paul released his solo debut ‘Modern Hearts’ in 2018 which introduced a more alt-pop
approach and brought him widespread exposure through tours across the U.S. and placements
in major motion pictures, commercials, with cuts on other major artist records. He has made
television appearances on Good Morning America, The Today Show, NBC’s Parenthood,
and The Tonight Show and his various bands have appeared in publications including Rolling
Stone, Billboard, Yahoo, and American Songwriter.

He was already known for his work as a member of Hightide Blues and the Grand Magnolias
and, when he is able once again to hit the road in support of ‘Modern Hearts’, he’ll likely be
fronting a nine piece band with some serious chops.

The ‘Modern Hearts’ album is a result of years of personal experiences, good and bad, and of
working with a range of musicians and producers and finally arriving upon that sweet spot. This
may be a ‘break up’ album, but it bursts with serious hooks and anthems; desperation is tempered
with introspection and, ultimately, redemption. Paul McDonald summed it up, “Darkness is a
beautiful gift. It introduced me to new layers of myself and gave me a brand new perspective, but
I'm happy to be out of it. The light feels pretty good these days.”
Born in Huntsville, AL and currently living in East Nashville, TN, Paul McDonald’s hope
is to spread peace, love, and unity through his music. He's a creative force that won’t stop
until everyone not only has heard his message but is a true believer.