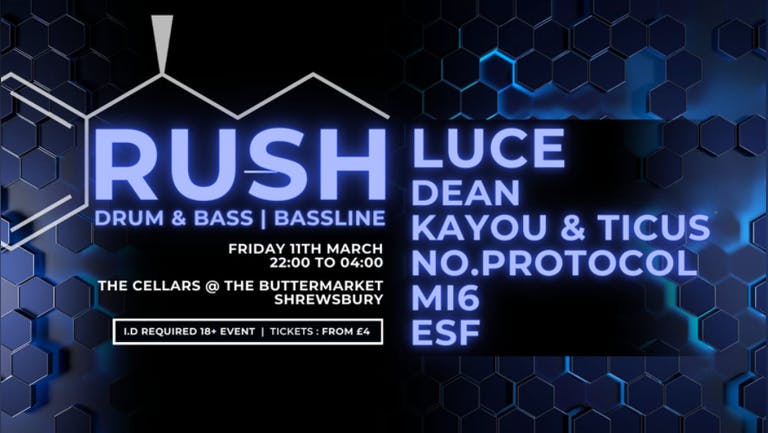 Following the HUGE success of our first event in January we are excited to announce the next installment on Friday 11th March! Expect another high energy night of Drum & Bass and Bassline

Hailing in from Shrewsbury, LUCE is a 20 year old high energy DJ with a love for all sub genres but having a soft spot for all things Dancefloor, Neurofunk & Bass House. Exploding onto the scene in the last 12 months, LUCE has played alongside some of the scenes biggest names in Birmingham & Sheffield, supporting the likes of Hybrid Minds, K-Motionz, Bou, Subsonic, A.M.C & more!

A charismatic, emerging talent in Bassline music, DEAN has been tearing up dancefloors across the West Midlands. Inspired by the likes of DYDJZ & Mikee S, expect a tearout Bassline set!

Telford & Shrewsbury based Kayou & Ticus have exploded into the Drum & Bass scene over the last 12 months, playing at Subvert Shrewsbury, Dubbed Birmingham and residents on Dub Dealerz. Known for high energy, Rollers & Jump Up DnB these guys bring some serious energy to their sets.

Shrewsbury based No.Protocol brings a whole load of funk & vocals to his D&B sets. With his two bootlegs of Black Eyed Peas & Sway smashing it on Soundcloud, he blends a multitude of sub genres effortlessly and brings a real unique vibe to any rave.

Telford based Arran Leneveu AKA Mi6 was inspired to start mixing following his love for high energy Jump Up D&B from the likes of A.M.C & Turno. Expect alot of cutting and slicing in his sets as he goes blends banger after banger.

Lover of 4x4 Bassline, Speed Garage and D&B, Elliott Faulkner AKA ESF joins us for his debut club performance! Expect a big Bassline set from this West Mids up & comers!

Early buy tickets on sale from £4!