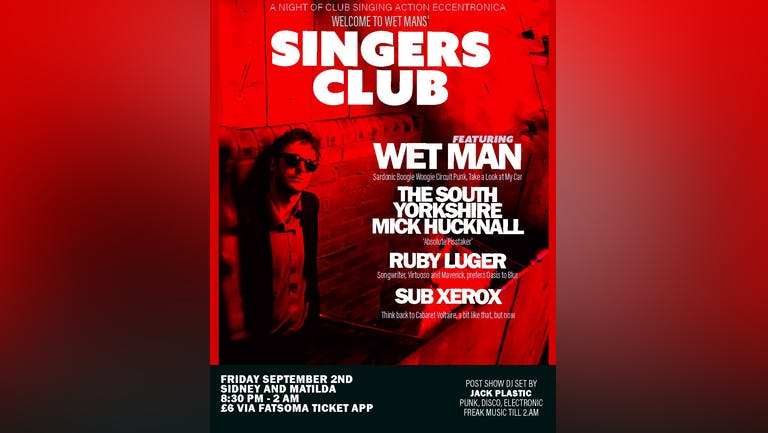 Made partally famous for his sardonic digs at conspiracy theorists with a track titled 'I Beleive in Lizard Men' Wet Man is an electronic punk force to be reckoned with, some say it echoes the sounds of Cabaret Voltaire meets John Shuttleworth, although this future music is hard to pin down. See his set on Cutscene TV

Locally known as 'Big Al' The South Yorkshire Mick Hucknall is a weapon against the straight laced, sets by the SYMH have split audience members in half, one half in hysterics the other gone with the wind.

Ruby Luger is a Virtuoso, artist and romanticist and represents the finest songwriting talent steel city has seen in a long time. Also a cheeky get and pisstaker.

A one man part man part maschine electronic truthseeker, like John Foxx but with more electricity substations in his wake.

DJ SET TILL 2 AM WITH JO ASBO

Jo is the last of her kind and has been providing the party for the best part of 10 years, DONT ASK FOR REQUESTS. Playing Disco, Punk, Electronic Pop... General bangers and cool tracks