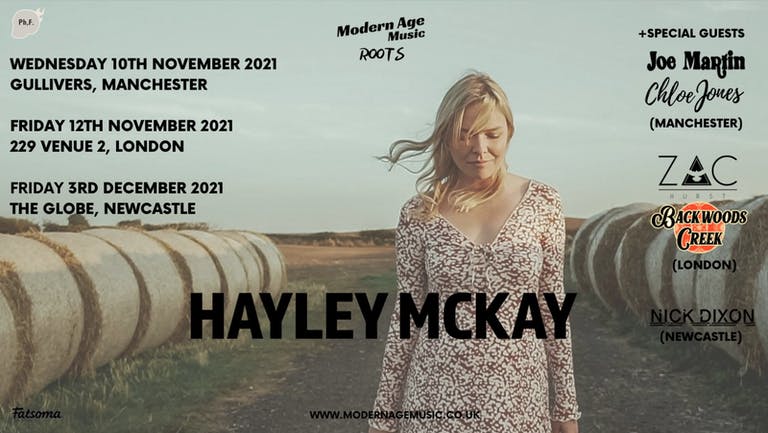 Displaying an incredible vocal range with a distinctive all-round style, which can effortlessly leap from earthy and soulful raw emotion to soaring and ethereal angelic tones, Hayley has been likened to Eva Cassidy, Joni Mitchel, LeAnn Rimes and Kate Bush.
An accomplished and insightful songwriter, who effortlessly captures deep emotional sentiment with moving sincerity, she has co-written with twice Grammy-nominated songwriter Jan Buckingham (Whitney Houston) in Nashville, performed in Bob Harris’s home studio for his Under the Apple Tree sessions, and has supported Tom Jones, Albert Lee, Scouting for Girls, Martha Reeves and Hazel O’Connor.

Hayley is releasing new material this year, and is especially looking forward to performing at The British Country Festival in September this year followed by C2C: Country-to-Country at the O2 Arena in London and Glastonbury when they return in 2022. Her next single Wild West will be released 23rd April on all digital platforms. Hayley is currently recording new material and is co writing with Nashville award winning writer Bill DiLuigi, Anna Neale, Phil Caffrey and Hattie Murdoch.

Hayley’s first performance onstage was when she was 9yrs old, performing a young Marylin Monroe at Her Majesty’s Theatre West End London. She has been performing ever since…In 2011 Hayley won a national talent competition and the funds enabled her to study at BIMM (Brighton) and Access to Music in London amongst her peer Jess Glynne. Since then, Hayley has performed both solo acoustic and with her band at major festivals including Glastonbury, Cornbury, Latitude, Lindisfarne, Willowman, Northumberland Live, The Sage Americana Festival and Hardwick Live.

When Hayley was 17, she was awarded a grant from Sunday for Sammy foundation. This enabled her to make her first EP with Jamie Squires (who you may have seen performing with the 1975) and producer Fred Purser.  From this Hayley was invited to perform at Newcastle City Hall Sunday for Sammy in front of a full house alongside north eastlegends including Mark Knopkler, members from Lindisfarne, Matt Healy (1975) and the cast from Auf Weidersehn Pet. A few years later Ray Laidlaw asked Hayley if she would like to sing on the soundtrack for Harrigan starring Steven Tomkinson. Hayley has also has also written songs for award winning educational films for schools nationwide.

Her song Breathe is part of the soundtrack for the upcoming documentary “Floppy toast with Drippy butter” by Lone Pine Pictures which will be entered into festivals worldwide.
She is also a Prince’s Trust ambassador and performs at numerous charity events.
Hayley’s songs have also garnered strong support on BBC Introducing, receiving accolades for ‘Track of the Week’ on many occasions on BBC Radio Tees.Her songs have been championed by Paul Sexton(BBC Radio 2 presenter & journalist) with airplays on Emirate’s flights.

She has also performed her original songs to audiences numbering hundreds of thousands on RTE, Ireland’s biggest daytime TV show, and on STV Scottish TV. Some of her music videos have also been played on Keep it Country TV, Spotlight TV and Fresh Country TV. Hayley’s recent single Breathe is getting played in over 600 caffe Nero Stores in the UK, was BBC Intro track of the week on radio Tees and to top it off she was invited to perform an acoustic live version for RTE1 The Today Show, National TV in Ireland. Breathe also reached the semi finals of the UK Songwriting Contest.

One of her upcoming releases has been shortlisted out of 18,000 entrants in the International Song writing Competition. In 2020 Hayley released her single Thinking About Last Night which reached no 1 in the Ignition Country Charts. The song was also voted as one of the top three best new singles in Ireland, reached the top ten in the Valley FM Indie Charts in Australia, garnered BBC Introducing support, and won Hayley the Artist of the Week spot on Radio New Wheels in the USA. It has been getting a lot of support around world especially in Ireland.