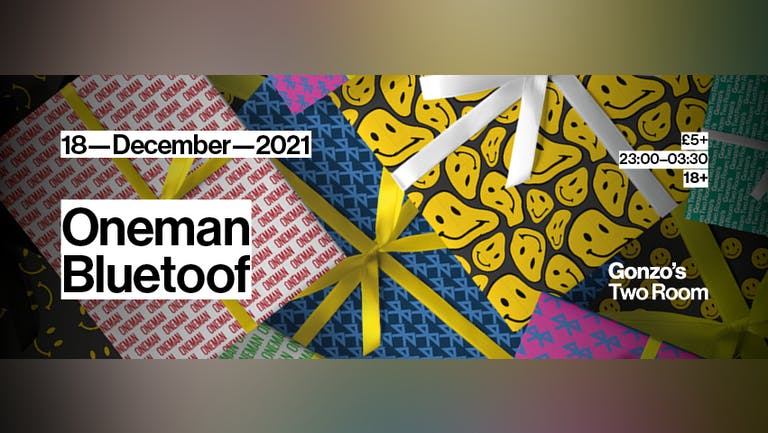 We're buzzing to bring to you two absolute heavyweights of the game: Oneman & Bluetoof.

There are DJs that are heavily tied to styles, people who go on to become figures synonymous with a certain sound or a particular approach to mixing; and then there are DJ’s DJs a different breed of people who manage to make the whole process of blending records from disparate genres look (and sound) seamless. Often, it’s not just about beat matching perfectly, it’s as much about capturing a mood and evolving it through your record selections as it is locking on to a consistent rhythm and that’s something that Streatham bred DJ, Steve Bishop has proven himself to be mightily adept at over the years and his now ample fan base reflects that talent.

As much as his sets under the Oneman moniker may have started turning heads by melding old school UK garage with DMZ style dubstep, he’s proven through his DJ sets and his regular presence on London institution Rinse FM that he can do so much more than just marry classics with current beats. Whether through his famed hip hop & R&B sets for The Boiler Room, the festival smashing back to back sets with Jackmaster as Can U Dance or opening for dance titans such as SBTRKT and Major Lazer, Oneman has that rare ability to destroy any party and leave you in no doubt who it was you've been listening to.

South London's Bluetoof is fast becoming one of the UK's staple underground DJs and producers. In both instances, Blue dips through multiple genres, touching on electro, breaks, UKG & techno whilst also reaching for influences from his Moroccan heritage.

Recent b2b's with London's Oneman on Fabric's 'London Unlocked' series highlighted his technical skills behind the decks which have been noted further via his mixes on FOLD and many events over the past year. Alongside a year of DJ sets across the country, recent performances at Keep Hush, Fabric & Wavey Garms have cemented his spot as one of London's most exciting emerging DJs.