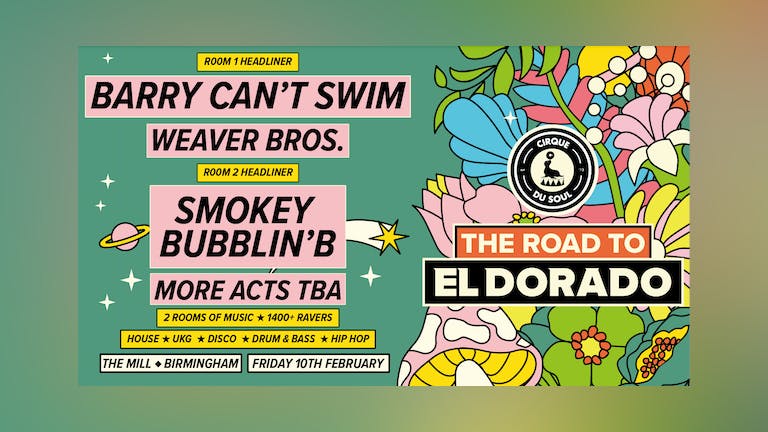 Roll up, roll up and step into the magical world of Cirque Du Soul as we present our annual 'The Road to El Dorado' Tour! We'll be transforming ‘The Mill, Birmingham’ into a mythical jungle playground as we bring you a small slice of the magic you can expect from El Dorado Festival this summer! Discover the lost ruins of the golden city buried deep in the undergrowth and uncover the rave within! Expect the unexpected and join the circus as all roads lead to the biggest event of all.... El Dorado Festival!

On headlining duties this time around we bring with us Edinburgh born, London based producer Barry can’t swim. Following a string of successful releases, he is quickly becoming well known for his trademark blend of skillfully crafted electronic production mixed with jazz inspired strings and keys. Support has been received from Danny Howard (Hottest Record), Sarah Story, Clara Amfo, Jaguar, Jack Saunders and Mixmag who voted his 2021 release with Anish Kumar as one of their 'Best Tracks of the Year' saying, "The joint tune from the pair brandishes a sublime orchestral lead up to its dancefloor-moving, four-to-the-floor finale." Barry was also tipped as The Blessed Madonna's 'Ones To Watch for 22 and he hasn’t failed to deliver. We can’t wait to have the man himself headline our show next month.

On Support we have invited one of our favorite producers to emerge from the UKG scene, the incredibly talented Smokey Bubblin’ B. With hits including ‘Poison’, ‘Rinse out’ and ‘Haribo’ he is sure to get the crowd bouncing as we transform birmingham’s iconic nightclub, The Mill.

As well as these headliners we will be welcoming our trusted residents and certified party starters, Weaver Bro’s as well as a range of other local talent across the night.

- The sounds of Drum and Bass, Hip Hop, House, UKG and Disco across the night.