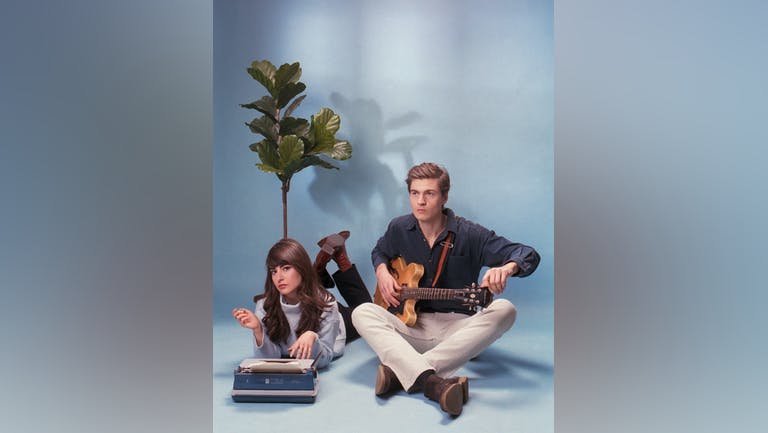 Kit Sebastian
London-based duo Kit Sebastian (aka Kit Martin and Merve Erdem) captivate their audiences with moments of pure pop bliss, timeless nostalgia and seductive complexity. Their unique sounds weaves a psychedelic tapestry of global influences, vintage synths and melancholy élan from the beaches of Bahia to the streets of Istanbul and Paris. A joyous expression of vibrant grooves and sophisticated lyricism that transcends boundaries, borders and social-cultural preconceptions. Steeped in artistic references, from dusty records to world cinema, their new album Melodi represents a considered maturation of the psychedelic jazz-inflected sound that introduced Kit Sebastian to the world on debut album Mantra Moderne in 2019.
With touchstones that read like an education in international counter-culture - Anatolian rock, French New Wave and the finest UK jazz - the resulting album is the most complete, lush and orchestrated expression of Kit Sebastian’s worldly aesthetic to date. Their crafted soundscapes use an array of instruments - zithers, harpsichords, congas, bongos, bulbul tarang, and a mock-up choir on top of the synthesizers, balalaikas, organs, and saxophones - to evoke a borderless planet and the seamless commune between past and present.

Despite being fused in and inspired by the multi-cultural environment of London, much of what has formed Kit Sebastian, both as musicians and people, has its roots in the interface between cultural heritage and lived experience.

For Merve, growing up in Istanbul, studying in Rome, and now living in London has meant a constant negotiation with her identity, the preconceptions of Turkey abroad and grappling with complex, layered, often problematic histories.

For Kit, who grew up between suburban London and rural France without internet, his love for music from around the world has led to a reckoning of what it means to create a pluralistic sound, without obscuring its origins in the process:

Followed by Kit Sebastian + Mr Bongo DJs until 3am.