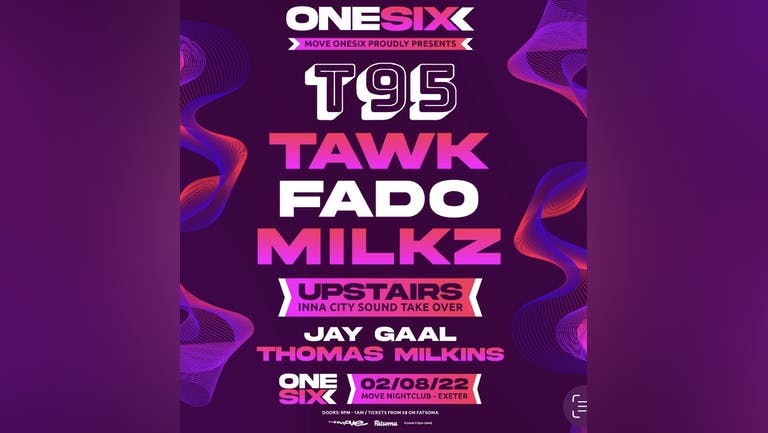 Having discovered DnB in his early teens through Chase & Status's seminal album 'No More Idols', this music has been a constant companion ever since. And his passion intensified from there. This came to a head at uni when his mates Kanine and Klinical – now DnB household names in their own right – introduced him to production, and the T95 story began.

Experimenting with Playaz-influenced jump-up, then – after an Outlook Festival-based epiphany – expanding his palette with the deeper sounds of labels like Critical and 1985, T95 has been an assiduous student of all flavours of drum 'n' bass ever since.

Now, even just a couple of years deep into his production career, he already has a strong discography to his name, including releases on Hospital, Overview, Shogun and Playaz. It's clear that T95 is hitting absolute prime-time. As a producer, he's at the forefront of the current trend of emcee-led vocal tracks, with the likes of DRS, Degs Harry Shotta,and Duskee already having laced his beats. And there's a lot more to come.

As a selector, able to draw from his personal dub supply as well as his deep knowledge of a variety of styles and sub-genres, T95 is equipped to take ravers on an intense journey through multiple musical vibes, or to simply blow the roof off with screwface savagery. It's not a show to be missed.

T95 represents the essence of contemporary drum 'n' bass, and is creating music that may very well typify and define the current scene. So don't sleep on him. As his name rises up the flyer, just be thankful you paid heed and spotted the T95 talent early doors.

CLUB NIGHT AIMED AT AGE 16 PLUS  TO GET A REAL CLUB EXPERIENCE, WITH HEADLINE ACTS.  NOT A SCHOOL DISCO! THE ONLY DIFFERENCE TO A NORMAL MOVE CLUB NIGHT, IS THERES NO BOOZE ON SALE.

(No alcoholic drinks will be available).

Passport must have recent picture- baby pictures not accepted.

College N.U.S. card with another form of id with date of birth.

We recommend this as an id, the pass card is only £10 and less hassle replace  if lost http://www.pass-scheme.org.uk

Sorry but no ID is a no entry without refund, please ensure you have before purchase.

Please download ticket before entering or you'll be asked to rejoin the queue.

Thorough searches and use of metal detectors are a condition of entry any illegal items or alcohol will result in refusal.

Refusal will result in non entry and a refund not applicable.

Anyone considered to be under the influence will not gain entry or will be removed again refund not applicable.

Entry only guaranteed until 11pm.

Range of soft drinks on sale.

The event ends at 1am please arrange your taxi or lift home prior to the event ending.

There isn't a taxi rank near by.

No refunds offered unless event cancelled.