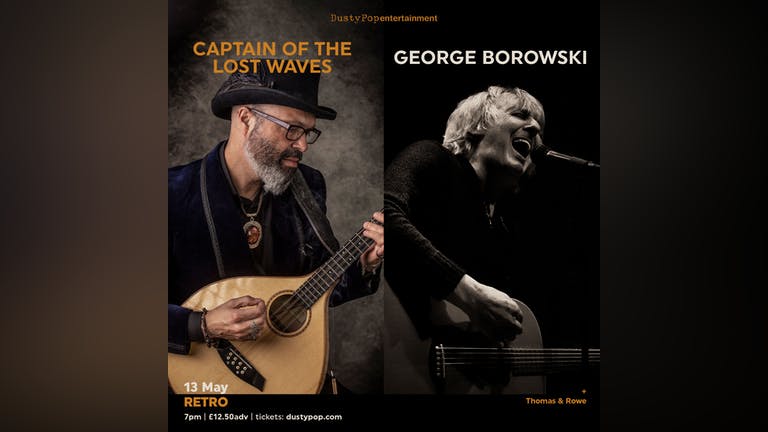 Alfie Terry and The Mushroom Pickers

The Captain is a troubadour, storyteller and free thinking renegade. His musical offerings are inspired by the great songwriters and philosophers of yesteryear. This is visceral music for the mind and body, full of dreamy verses, life affirming choruses and sheer audacity. Where melodic invention meets alternative folk, progressive, world and ambient sounds.

He is not just the figurehead of his musical vessel, he’s ringmaster, bard, master of ceremonies and sage. There’s far more to him and his absurdly engaging world than any of your ten – a – penny musical stars. Seen through showers of glitter, kaleidoscopic lens flares and in the rainbows of a million puddles. The Captain tells sonic stories to connect with everyone pasty, present and future.

Expect improvisation and intuitive performance featuring Bouzouki, Ukulele, Mandolin, Guitar and sparing use of loop pedal. Often A Captain show has been described as ‘like trying to describe the colour number 9, impossible, it has to be experienced to be believed’.

Previously signed to Voiceprint under his natural guise Shaun T Hunter and Quiet Rebellion. He released three critically acclaimed albums, two of which were Borders Book Store’s album of the month. Off the back of this he carried out a residency at the famous 12 Bar Club, London. He was also voted Acoustic Roots performer of the year at the Leeds Independent Music Awards in 2005.

Voted outstanding songwriter of the year from the Yorkshire Gig Guide Awards 2017.

Making music is a communion to the Captain and much of his work has taken place in a music therapy guise. Playing in secure units, prisons, mental health units and hospitals. The connection is always about the most authentic exchanges between an artist and his audience, based on a shared humanity.

The Captain was chosen by English Folk Expo as just one of 12 English artists to represent team England in the inaugural Global Music Match 2020, an exercise where 96 artists from 14 countries were featured world wide.