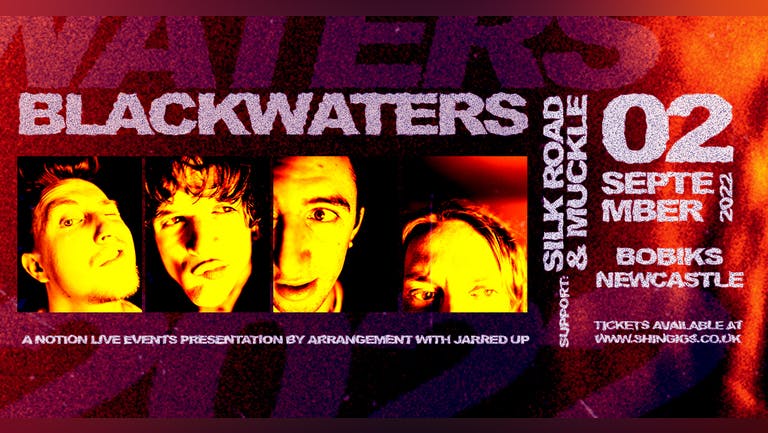 Following their meeting and forming at college in Guildford, via a revelatory FIDLAR gig that made them all re-set their ambitions, Blackwaters decided that the medieval market town had probably had quite enough of their notorious yard parties, house gigs, and general noise and felt it was about time somewhere else had a dose of them. One glance at the heart-palpitating rental prices and a keen desire not to play the sort of games bands in London are so often forced into sent Max Tanner (vocals), David Carpenter (guitar), Ollie Franklin (bass), and James Watkins (drums) off looking for options.

As a result, Sheffield became home. Blackwaters headstrong approach has seen them set up their own Jarred Up Records as a way of getting their releases out to fans in the form of limited, handmade CDs and vinyl, and have gone on to sign other local bands to their roster. Their Jarred Up Arts Lab is a constantly evolving project that aims to unite musicians, artists, and creatives of all types to create a cohesive and productive fusion of minds and ideas, similarly to the hubs that spurred on the work of many 1960s dreamers and idealists. Their lifestyle is a ‘live together, drink together, work together, play together’ one, which cements the idea that Blackwaters isn’t a hobby, a pastime, or something to do when they’re bored; it’s the last gang in town, no plan B, backs to the wall, all-in.

As it should always be. Priding themselves on doing things their way rather than the way others might like to map out for them, Blackwaters have become notorious in their adopted home city for their DIY approach. Pop- up shops in their shared house and rammed gigs in their backyard have become the stuff of legend. Those that manage to ram in gain “I was there when...” bragging rights, as well as being able to shove two-fingers in the face of the “music isn’t exciting these days” nostalgia-vultures who so regularly and eagerly wish to strip the carcass of the past at the expense of the present. Fans of Blackwaters have come from both expected and unexpected places. Legendary producer Youth latched on early, whisking them off to his Space Mountain Studios to work with them on their debut EP, People Street, as well as inviting them along to be special guests on Killing Joke’s UK tour. Support slots with the Marmozets, DMA’s, and Supergrass have also proved highlights for the band.

Given the frenetic, chaotic, volatile, and unpredictable live shows that are Blackwaters calling card, it’s perhaps no surprise that the attention of Carl Barat was caught, getting them along for The Libertines support slots and, along with Olly Burden, working on the tracks Let The Good Times Roll, Down, So Far Out and Fuck Yeah with them. 2021 sees the release of Blackwaters debut album titled, ‘Something Good In Lost Time’ and taking every opportunity they can to push things forward whilst avoiding tired clichés and pitfalls; a job easier said than done in an industry that seems designed to break the minds and spirits of those not up to the task. It’s getting harder and harder to be free; Blackwaters are here to make it seem not just easy, but a whole lot of fun.