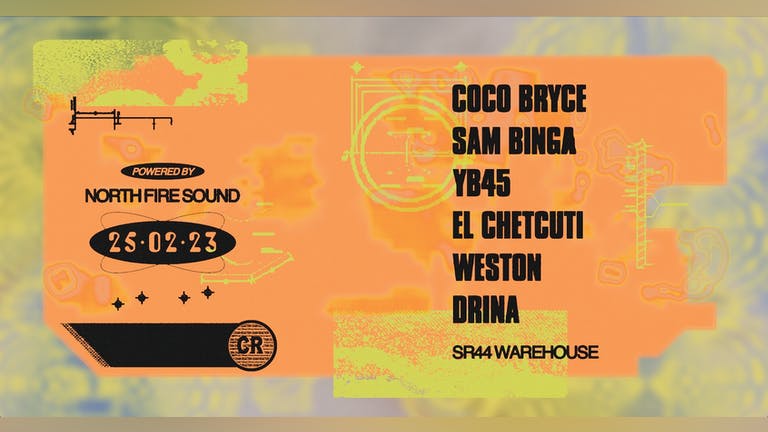 We return to the Warehouse at full speed with a packed line up. Coco Bryce & Sam Binga are two artists we have been itching to record in Newcastle. In true CR style we have incredible local artists being recorded on the night: El Chetcuti, Weston (Shy Bairns), Drina & YB45.

Tickets start at £6, do not miss out.

With well over two decades of experience as a DJ, producer and label owner under his belt, Coco Bryce can be regarded as a seasoned veteran in the world of uptempo dance music. By the late '90s Coco had taken to producing as well, leading to his first vinyl release in the year 2000. Ever prolific and never satisfied with sticking to any one formula, his discography contains over a hundred releases, spanning a wide variety of genres and labels, most notably Fresh 86, Lobster Theremin, Critical Music and of course his own imprints Myor, Myor Massiv, Diamond Life, Faces Of Bass and Ill Behaviour. A more recent development has seen him add yet another activity to his already busy schedule, hosting a monthly show on Peckham, London based internet radio station Balamii, where he can be found every second Tuesday of the month. Coco Bryce previously played at Midnight Request in Newcastle which was a phenomenal night, one of our faveourite producers here at Chain Reaction. Special to have his debut in SR44!

Sam Binga is an artist at the meeting of dance music’s most vibrant strains. Since the project’s 2013 debut, the Bristol linchpin has consistently drawn a line between forward-thinking club sounds from around the world while infusing them with a classic UK soundsystem sensibility and a unique personality which can only be described as his.

From the bump’n’flex of Garage to the intensity of Jungle, the Afro-Caribbean influences of UK Funky to the percussive energy of Grime and Footwork – Binga’s channelling of worldwide influences has resulted in some of underground dance music’s most innovative music of recent years, with ripple effects felt worldwide. Along with frequent collaborators Fracture and Om Unit, Sam was part of the first wave of UK artists to take the rawness of Chicago’s 160bpm pulse and mix it with elements of classic Jungle to create a cross-genre, cross-continent cultural conversation that is still making waves today. At the same time, early experimentations with Redders spawned ‘AYO’ and ‘Lef Dem’, epitomizing the ‘halftime’ sound which became a movement that brought a whole new sound to one of dance music’s most enduring forms – drum & bass. Wasted Days, his standout 2015 debut, continued this journey, weaving Grime vocals and production seamlessly into his work and reaching out across the globe to feature vocal talent from Baltimore’s TT The Artist and Jamaica’s Warrior Queen, while his work with Rider Shafique has charted new links between classic Dancehall and cutting-edge club music.

We look forward to seeing you in the dance soon.

Finding the venue: SR44’s entrance is accessed via the alleyway behind Scotswood Road, where the 52 sign is located.