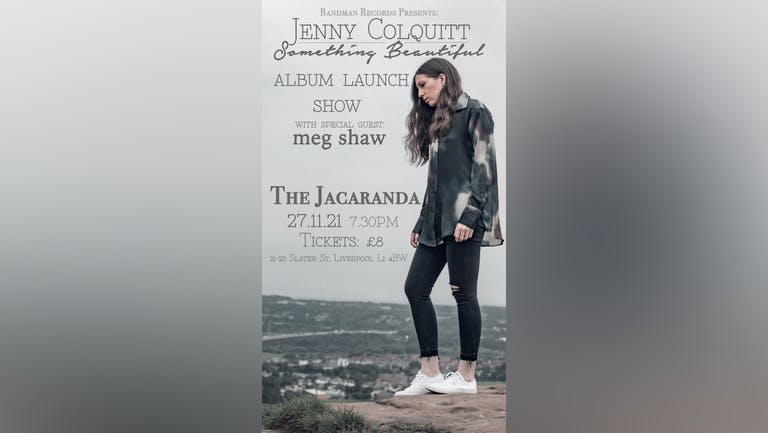 Last entry time: Please be prompt if you can but don’t worry if you are late

Breakthrough artist Jenny Colquitt will be gracing the historical Jacaranda stage for this fine evening of music presenting, for the first time, her debut album ‘Something Beautiful’ partly solo and partly accompanied by her supporting band.  With influence from a range of genres including Eva Cassidy, Evanescence, Alanis Morissette and Sandy Denny, the album has just about something for everyone and is set to make a mark and kick off her blossoming career.  Jenny’s sound has developed from her previous releases ‘The Quiet Kind’ (2016) and ‘Dear Daughter’ (2020).  With what is now years of song writing experience, the album represents a direction of music and creativity that can be marked as unique, eclectic and diverse as well as authentically Jenny. If you like folk, rock, Americana, pop and blues then this album is for you.

Joining her on kicking off this new chapter in her career is Liverpool based artist Meg Shaw.  The 21 year old takes inspiration from pop, jazz, funk, RnB and anything that catches the ear.  With focus on vocal harmonies and catchy choruses, Meg has released tracks ‘What You Deserve’ and ‘The Escape’, with many more in the works for the future.

We look forward to sharing the evening with you.