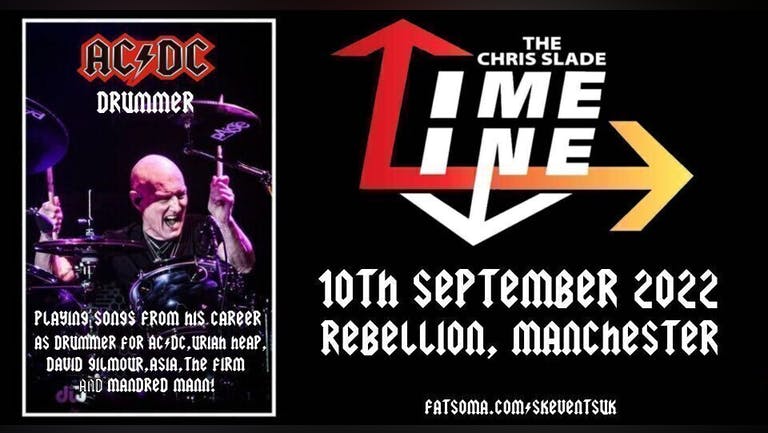 Join us at Rebellion, Manchester on Saturday 10th September 2022 for rock legend Chris Slade alongside his band "The Chris Slade Timeline" playing a set spanning classics from from his career as drummer for AC/DC, David Gilmour, Uriah Heap, The Firm (Jimmy Page), Manfred Mann & a whole load more!

With a setlist made up from all the big AC/DC tracks & more, this is an unmissable show for all fans of classic rock and Akka Dakka!

AC/DC drummer CHRIS SLADE with his band ‘The CHRIS SLADE Timeline’. THE CHRIS SLADE TIMELINE was formed in 2012 to celebrate CHRIS SLADE’s 50 plus year career as a professional rock drummer since he started with TOM JONES at the tender age of just 16 years.

Since then he has performed with all the greats, including AC/DC for two major World tours and two albums. MANFRED MANN’s EARTHBAND, COUNT BASIE, TOM JONES, PAUL RODGERS and JIMMY PAGE, DAVE GILMOUR, URIAH HEEP, GARY MOORE, ASIA, MICHAEL SCHENKER and many more!

THE CHRIS SLADE TIMELINE take music from all of the above, so expect to hear all the hits you know plus plenty you forgot you love!! The band have toured the UK and Europe extensively, continuing to delight audiences everywhere, giving fans a chance to get ‘up close and personal’ with the drumming legend.

Their touring was interrupted for two years when CHRIS SLADE received the call from AC/DC at the end of 2014 to return for the ROCK OR BUST TOUR.

THE CHRIS SLADE TIMELINE came back with a vengeance in 2017, this time taking with them the AC/DC ROCK OR BUST drum kit, to successfully extend their tour to France, Switzerland, Luxembourg, Belgium, Austria, Germany, Italy, Portugal and even RUSSIA to perform at The MOSCOW OLYMPIC STADIUM for the KREMLIN CUP ATP World Tennis Tournament – The first rock band EVER to do this!!

An added interest is that in Europe they tour with the original drum kit from the ROCK OR BUST AC/DC WORLD TOUR, in USA it will be the kit he performed with at the 57th Grammys. Both kits include the Chris Slade signature side bass drums made famous by ‘Thunderstruck.’ Fans have the very rare opportunity to view either of the kits and get ‘up close and personal’ with an actual member of AC/DC.