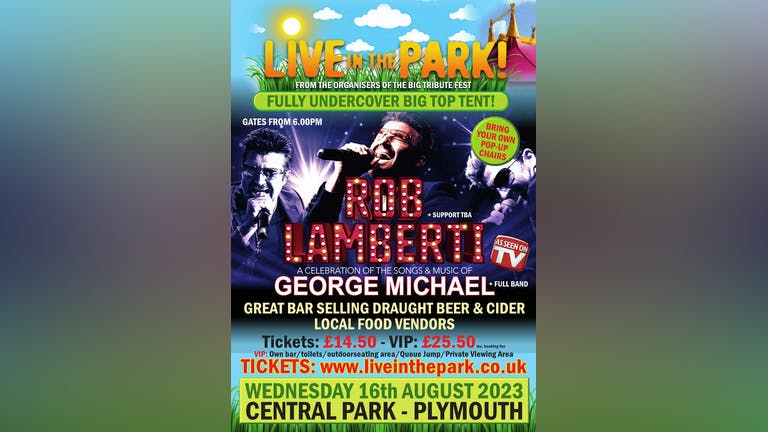 Rob Lamberti, A celebration of the songs & music of George Michael

Age restrictions: UNDER 18S MUST BE SUPERVISED
Live at the Park
230 Followers

Rob Lamberti, A celebration of the songs & music of George Michael

Live in the park - Coming to Central Park August 2023, Located on the events ground opposite Plymouth life centre.

Featuring  'ROB LAMBERTI' the worlds no1 tribute to George Michael. Including full band

Rob Lamberti is a familiar face, so to speak, having forged a very successful singing career impersonating the pop star George Michael and in the process becoming something of a star himself.

"People are always mistaking me for Rob Lamberti"George Michael, 2014

Not only does Rob Lamberti sound like George, his resemblance is so great that when Rob appeared as George on Stars in Their Eyes in 1994, the programme's make-up department had to 'tone down' his natural appearance before the 'transformation' took place, so as not to give away who Rob would be impersonating.

"Believe it or not, it all began for me via Karaoke," reveals Rob. "I had been working in Northumberland in 1991 when Karaoke was just emerging on the entertainment scene. One evening unbeknown to me a friend had nominated me to go up and sing. I can still remember the tune, and although it was Simply Red's 'Holding Back the Years' I enjoyed singing so much that after that evening I'd get up and sing every week. It was actually the Karaoke compere who first commented that my singing voice was like George Michael's."

Not seeking stardom but simply enjoying being up on stage, Rob returned to Lincolnshire when his work contract ended, where there happened to be a karaoke competition being hosted at his local pub. He entered performing perfect renditions of George Michael's 'Faith' and 'Don't Let The Sun Go Down On Me' which went down a storm. The competition had been videotaped, and it was friends who ensured that he was then seen and heard by the right people.