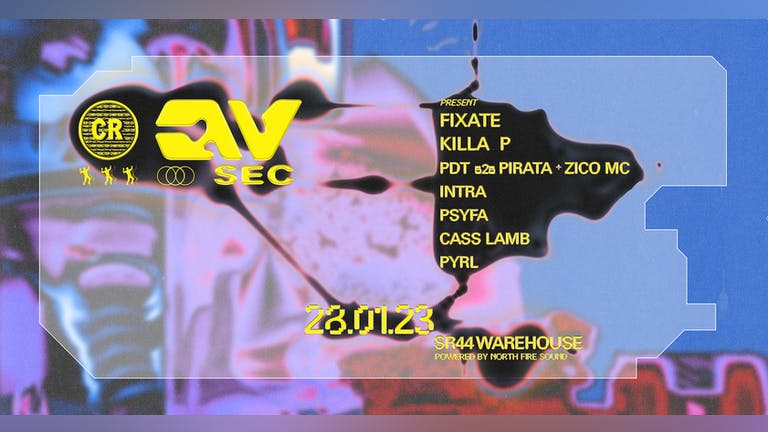 Chain Reaction is back! We have joined forces with Avant Sector to bring something especially dark to you here in Newcastle!

As always, the best sound, the best people and incredible music. Back in the SR44 Warehouse for the first event of Season 2 with North Fire Sound bringing the energy and Fixate & Killa P being recorded through both audio and video. CR X AS are too gassed for this; tickets start at £4, these will go quickly...

Declan Curran, aka Fixate, comes from a generation that isn't locked to the notion genre, he is product of UK musical innovation with his sound pallet & productions traversing styles such as drum & bass, jungle, dubstep and grime.

His debut release, ‘Pum Pum’ / ‘System Malfunction’ on Diffrent Music, immediately caught the ears of the great and good of the electronic music world with it’s discombobulating rhythmical patterns and clever fusion of multiple genres. Support came from DJ’s as diverse as Toddla T, Sam Binga, Alix Perez & dBridge amongst others, with the latter releasing two of his collaborations with Manchester’s Chimpo, ‘Bun It’ & ‘Dumb’, on Chimpo’s ‘Out An Bad’ EP a short while later.

Following on from the success of these initial tracks, he was tasked with writing his first solo EP for dBridge’s hugely respected, taste-making label Exit Records. The ‘Throwback Therapy’ EP was released in May 2015 to much acclaim, with the 4 tracks demonstrating the wide ranging influences and artistic flair of their creator.

He has since become a flagship artist for the label, with his follow up ‘March On’ EP and work as part of D&B supergroup ‘Richie Brains’ garnering praise from critics and fans alike. November 2017 sees the release of his biggest and most ambitious project to date, the 6 track mini LP ‘What Goes Around’. With 4 solo cuts as well as collaborations with Dismantle & Skeptical, it builds on everything that has come before and cements his reputation as one of the most exciting young talents in UK bass music today. The Warehouse is not ready.....

Hailing from South London. Killa P grew up as an integral member of the Roll Deep crew, alongside Flowdan and Wiley. His work rate and consistency has led him to become one of the scenes most in demand Mc's over the past 10 years. The last 10 years have seen him tour Asia, India, Europe and the UK, with his highly anticipated debut North American tour scheduled for early 2022 as he continues to cement his place as a globally sort after artist.

In recent years Killa P's vocals have become a staple in raves up and down the country working with producers such as Alix Perez, Turno and Trampa to name a few. This has led to recent releases on the infamous Never Say Die Records, Crucast and a single further released on the world renowned Deadbeats label.

There's no questioning Killa P's ability, as his dedication to his craft allows his fanbase to continuously grow, meaning the demand for him just keeps developing. Make sure you do not miss out on this opportunity.

On support we have some local legends coming to mash up the dance: PDT B2B PIRATA & ZICO MC, INTRA, PSYFA, CASS LAMB & PYRL all being recorded live at Chain Reaction.