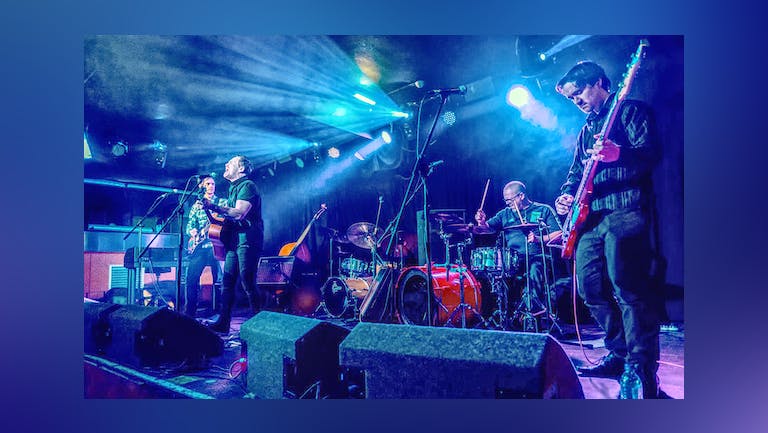 The Happy Future were formed in Manchester in 2015. Karl Walsh originally signed to Factory Records by Tony Wilson was founder member of To Hell With Burgundy. The Acoustic trio played all over the world with Bob Geldof, The Pogues, Barclay James Harvest and Graham Parker. Walsh wrote three novels in France before returning to the UK to form The Visitors with Mike Crook and Frederick Apps in 2012.

The Visitors release their debut album ‘Above You’ on Earliest records and came to the attention of Philip John who was working as a promoter in Manchester as well as presenting his own radio show ‘The Hand of Prog’ on FAB Radio International.

The happy Future’s first gigs were played as a trio with Frederick Apps on drums and Philip John on Bass.

John, a multi instrumentalist had previously fronted his own bands and enjoyed the challenge of utilising his vast musical knowledge and education as well as his contacts in and around the Manchester music scene to add a sophistication to Walsh’s catchy tunes. Frederick Apps had cut his teeth playing in bands of all genres in venues all over the country (not least the UKs biggest Doors tribute The UK Doors) as well as being a major player in The Visitors.

Karl Walsh met Karl Markham at an open mic night in Didsbury called The Art of Tea. Markham an extremely talented solo guitarist was blowing audiences away with his renditions of original tapping style acoustic tunes. Having played in some cool outfits in his hometown Sheffield Markham came to Manchester (where else?) to finish a music degree and to play lead guitar in a great band.

The potential for great work presented itself and the result was The Happy Future.