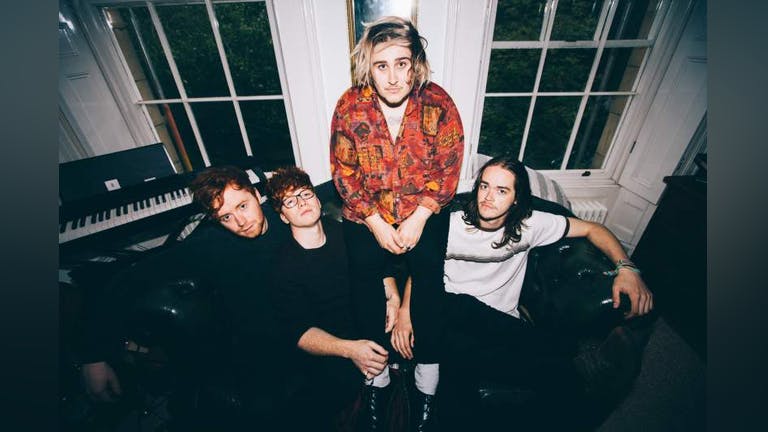 COQUIN MIGALE are from Newcastle. They consist of Alex Soper (guitar / vocals), Stevie Kane (bass) and Josh Holmes (drums) and are pronounced "Co-kane Mig-elle". ‘Munro’ is their debut album which mixes together COQUIN MIGALE’s fizzbombing releases thus far with some cracking Newcy newbies, while also having the decency to include next single ‘PT. 2’, released on August 5th.

'Grindie' / ‘Twang’ was their first fierce panda single in May. As the title might suggest, ‘Grindie’ represents a winningly grin-worthy car-crash of grunge and indie, all smash-banging in under three manic minutes. As such it sets the musical template for ‘Munro’ with its hectic guitars and fragrant vocals and emboldened riffs and lovely subtle cosmic rock flourishes – much like the short sharp song titles ‘Munro’ rattles through eight tracks of terrifically poised and nonchalantly epic alt.rock in half an hour.

Little wonder that the likes of ‘Grindie’ and previous releases ‘Gold’, ‘Socotra’ and ‘Luv’ should have all burrowed their sweet, sweaty ways into the hearts of the nation’s finest disc jockeying tastemakers such as Huw Stevens, Tom Robinson, John Kennedy and Phil Taggart as well as meriting the homegrown love of BBC Introducing Newcastle.

“There’s no denying the fact we want to hear our songs being played on the radio, whether it's local radio stations or national radio stations,” they shrug, raffishly. “Everybody wants their music to be heard, right? It still has to be us, we still all have to agree that this is a 'good' song, this is something we enjoy playing and hearing. We ain't just smashing out any old garbage, we're just aiming to have our tracks reach their absolute potential.”

"A constant onslaught of shifting energy...short and snappy and everything that good powerful rock music should be." – The Tipping Point