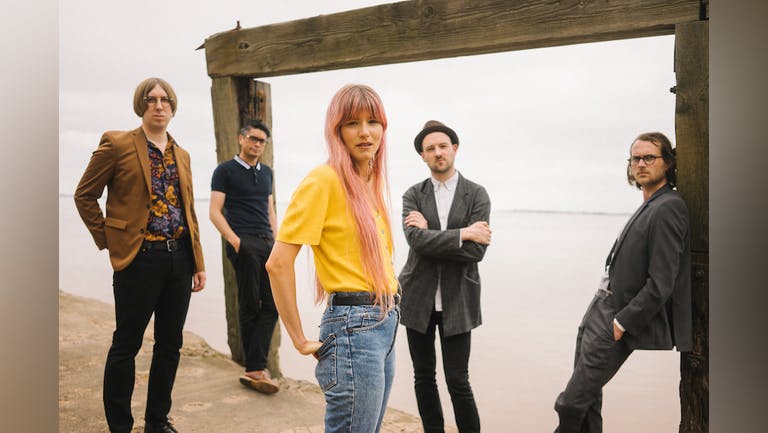 It has been a whirlwind couple of years for London indie-pop quintet Night Flowers, since
these close friends from North England collided with Boston, Massachusetts born vocalist
Sophia Pettit and began forming their irresistible brand of heart stirring, romantic pop. Creating
a joyous combination of intertwining female/male vocals backed by glistening guitars and
dreamlike atmospherics that has seen them amass friends, fans and accolades across the
world.

The release this spring of their long awaited debut album 'Wild Notion' has received
widespread praise. The band have hit the road in full effect, blowing blissful gales through
audiences all summer at packed out club shows and festivals such as Bluedot, Kendal
Calling and Indietracks, having only just spent 2017 touring the UK with The Pains of Being
Pure At Heart and Japanese Breakfast, as well as a main stage performances at End of The
Road and Visions.

With extensive UK and European dates and a Japanese tour under their belts, the future is
looking bright and busy. The group return to Japan this November to tour their release on
Japanese indie label Rimeout Records. Next year has them heading to festivals on the
European circuit and a wealth of club shows in Spain, France, Germany, Italy and Norway, as
they prepare to unveil a wave of new material, fully reaffirming why everyone has them pinned
as a true indie-pop sensation just moments from boiling over.

“Sounds like Dinosaur Jr sharing a peace pipe with French chic rockers Phoenix”, is a
quote from Q Magazine about Norwegian indie rock lifers Beezewax. It’s probably the best and
most concise description of the band both in spirit and musicality. The melodic pop precision of
Phoenix combined with the punk fueled force of the mighty Dinosaur Jr. Throw in some
Teenage Fanclub harmonies, Buffalo Tom earnestness and Superchunk energy and you’ve
pretty much got the main ingredients of Beezewax.

The new single ‘Closer’ is a direct and classic pop song, that’s deceptively simple in form, yet
never stops sounding exciting. The song follows two characters who are very much alike and
who are very private, and keep to themselves but both share the love for magnolias and other
late night phenomena.

For the recording of ‘Closer’ the band invited two friends to lend their voices to the song’s
timeless melodies: Sophia Pettit from Night Flowers (UK) and Jon Auer from the Posies and
Big Star (US).

– The song had a 4AD vibe to me so I started thinking Sophia and Jon would sound good in
the song. Also, we thought it would be cool to invite Sophia, one of our current favorites to sing
with Jon, an artist that was very important to us when we started the band, said Kenneth Ishak,
Beezewax’ singer, guitarist, songwriter and producer.

Their previous album (Tomorrow, 2014) sent them out playing festivals like Prima Vera Sound
(ES), Twisterella (UK), Out of Spite (UK), Donostikluba Festival(ES), in addition to club tours
in the UK, Japan, Spain & Norway and earned praise from publications like Q Magazine, The
405, Magnet, The Line of Best Fitand more.

Next year Beezewax will release a new album. The process of the recording has very much
been influenced by all the touring the band has done the last few years. Energy and harmonics
has been keywords for the recording. Capturing the vibe of the band playing live together in a
big room, with the guitars bleeding into each other as they would on a live show, and collectively
creating the energy of the songs. The band has already played several club shows and festivals
in the UK, Norway and Sweden after the first album single ‘Rainbows’ was released this
summer, and they were invited to join Buffalo Tom as a supporting act on their European tour
this fall. And early next year the band will join Sophia Pettit’s band Night Flowers for a
co-headlining UK tour.