This event has already happened! Click here to see upcoming events from Bobiks 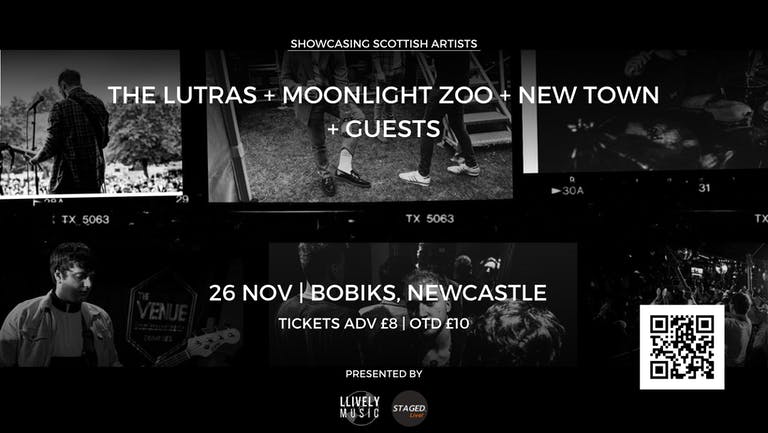 All ticket buyers are entitles to 10% off the venues food menu pre show! 🍔

The Lutras are Scottish 4 piece who quickly went from playing in pubs to playing sold out shows & festivals all over the UK. Releasing their debut single Run & Hide in 2018 & going from strength to strength since.
The bands 2020 Christmas Charity Single Give It Up For Christmas went to #8 in the iTunes Charts and sat at #47 in the official charts, raising money for Shelter & The Music Venue Trust. Their latest release ‘You I Need’ featuring Kate Kyle peaked at #1 in the UK iTunes Country Charts.

Moonlight Zoo first broke out of there cage in 2016, escaping their hometown of Dunfermline to cut their musical teeth busking around the streets of Europe. The band honed their sound on the pavement, learning to sing in three-part harmony and play with ferocious aggression in order to cut through the noise of the city, before returning to Scotland to take there unique brand in of alternative anthemic pop to the big stage. Heavily influenced by Scottish rockers Big Country, Moonlight Zoo borrow there anthemic Celtic elements of there hometown hero’s and infuse it with a modern pop twist inspired by artists like HAIM.   Since forming Moonlight Zoo have taken their wild live shows to every corner of the UK and performed at major festivals including Isle of Wight, TRNSMT and Kendal Calling. Their first single “Breaking or Broken” was Radio X Track of the week and called “...the best debut we have heard since blossoms burst into the scene” by renowned tastemakers This Feeling. Follow up single “Wild” was a BBC One Scotland single of the week and let to the band selling out the infamous King Tuts Wah Wah Hut and touring nationally.   2019 was the bands biggest year to date as they made it through multiple heats to be crowned champions of Hard Rock Cafe’s international Battle of the Bands after playing for a host of industry experts at the paramount theatre in Times Square NY. Moonlight Zoo are currently working on writing new material with releases and shows planned for 2021

New Town are an emerging alternative guitar band originating from East Kilbride. They create uplifting indie-pop tracks which have hung around danceable guitar riffs, emotional lyricism and passionate vocals. The rising indie guitar outfit have many plans for the year ahead. Following a sold out King Tuts appearance new releases are already in the works for early summer with many shows still to be announced.