This event has already happened! Click here to see upcoming events from The Slaughtered Lamb 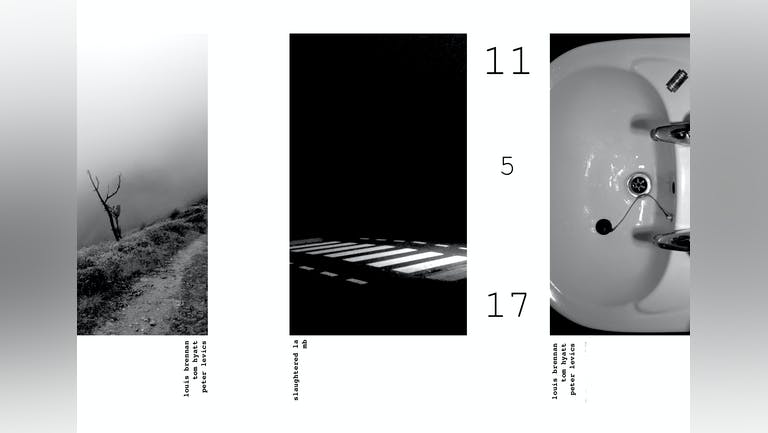 By The Slaughtered Lamb

London based Dubliner Louis Brennan is a singer-songwriter in the folk tradition. His folk however aren’t the field hands and travelling minstrels of yore but the repressed middle managers and ennui-ridden urbanites of late stage capitalism. They populate tales of bad sex, half-drunk commutes and interpersonal claustrophobia delivered in Brennan’s cracked baritone, at times embarrassingly intimate, at times spuriously broad, peppered with pitch-black humour.

Son of artist and ‘punk professor’ John Hyatt (The Three Johns), it’s unsurprising that Tom  Hyatt gravitated to the stage. More surprising, perhaps, is a Masters degree in Physics and Philosophy from Oxford, where his songwriting began to take form: “I’d emerge bleary-eyed from the library post-midnight ready for bed, but head first to the college chapel piano to sing into the darkness”. After years distilling reality down to its fundamental parts, Lancashire-grown Hyatt headed to London in search of the long neglected right-side of the brain. Martin guitar in hand, the capital’s clubs and folk rooms soon reverberated with his original compositions.

With performances at the likes of the National Portrait Gallery, Danny Boyle’s Shuffle Festival and Bestival, it was Spiritual Bar in Camden that would prove to be the best fit for Hyatt’s mind and music. It’s unique authenticity and eclectic scene of rock, folk and blues musicians honed Hyatt’s craft, captured on his debut live album, Live at Spiritual (2017).

“Sophistication and aplomb which is incredibly rare…

one of the most intelligent, relevant singer-songwriters in the country”

Peter Levics are an instrumental duo combining classical and folk elements with an alternative/indie approach to create their own unique brand of melancholic disquiet. Their plaintive and spartan compositions bring to mind the likes of early Penguin Café Orchestra, Sandy Denny and the hypnotic minimalism of Steve Reich and Philip Glass. The Latvian duo release their new album “Narcissism and Doubts” on February 23rd.