This event has already happened! Click here to see upcoming events from The Foundry Torquay 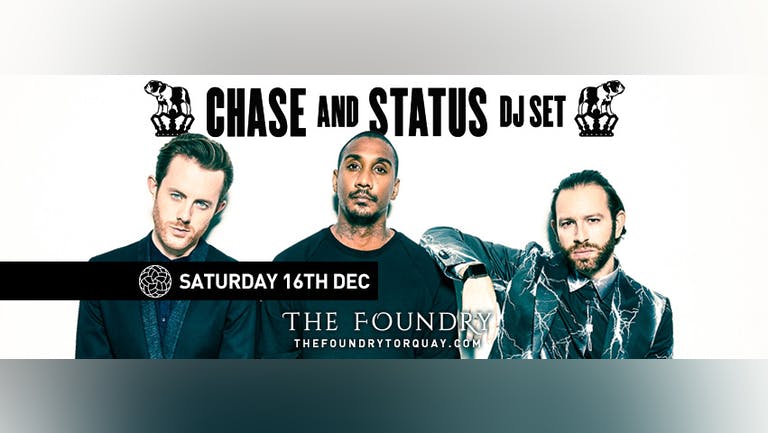 By The Foundry Torquay

With a monster support billing, this is set to be our biggest event so far!

Pharrell Williams of N*E*R*D hails them as ‘The most exciting producers in the UK today’, Rihanna considers them ‘the backbone’ of her record ‘Rated R’ but this isn’t enough to quench the musical thirst of multi award winning, platinum record selling producers, writers and musicians in their own right, Chase & Status aka Will Kennard and Saul Milton. The duo, who count Jay Z and Snoop Dogg as fans, as well as drum and bass’ finest Andy C, Hype and Pendulum; enjoy heavy rotation in the hands of dub-step royalty such as N-Type and Skream; and have each release enthusiastically supported by Radio 1 tastemakers Annie Mac and Zane Lowe.

Brighton raised, multi award winning Friction is one of the most revered and recognised names in bass music today. Having risen steadily through the ranks since the early 00's as arguably the most adept and ferocious DJ/producer in the scene, Friction now holds court in the D&B Hall Of Fame thanks to his inauguration at the 2011 Drum & Bass Arena Awards.

Whilst DJ'ing across the world every weekend and heading up the juggernaut record label Shogun Audio, Friction was announced at the start of 2012 as the new face of Radio 1's flagship Drum & Bass show and has been broadcasting from the World famous station ever since..

His remix credits include Wretch 32, Childish Gambino, Example, Maverick Sabre and Feed Me to name a few and his own productions continue to cause damage across dance floors worldwide.

Hailing from Nottingham UK, Inspired by the gritty sub low frequencies. Darkzy has developed his own unique sound,taking influences from the underground UK – Bassline, Drum and bass, Dubstep, UK garage and Grime. At the age of 20 he has already released a string of original and heavyweight remixes. No stranger to the club circuit Darkzy has gained support from fans worldwide, which has seen him rise so quickly. Exciting times ahead with new music and a rammed diary. Darkzy is fast developing a reputation as one of the UK’s brightest talents.