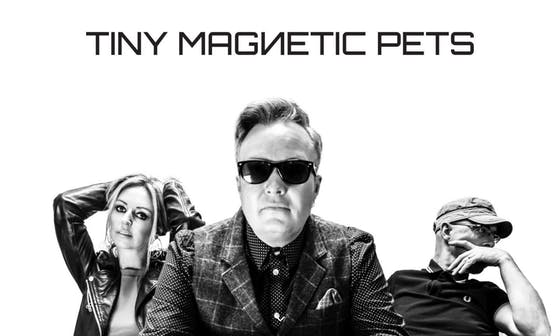 Tiny Magnetic Pets are an Irish 3-piece New Wave Synth band who have collaborated with Wolfgang Flur, supported Michael Rother & The Killers’ Dave Keuning. They have toured extensively with Orchestral Manoeuvres in the Dark – 30 shows (2017 & 2019) UK & German tours, and have recently toured with Midge Ure (25 shows) on his European tour in 2019 & UK tour early 2020, as well as 2 successful headline tours of their own in the UK.

The band have just recently released their album ‘Blue Wave’. Vince Clarke has remixed their forthcoming new single ‘Automation’ as well as Nick Reach-Up and this is available now to order.

“I love the whole album but there were tracks that blew me away – so beautifully crafted, so emotional, such clever writing with perfect emotion so we offered them the whole UK tour…”
Andy Mc Cluskey (Orchestral Manoeuvres in the Dark)

“Working with Tiny Magnetic Pets was great fun for me. I like the Irish band very much, we are friends. Paula Gilmer’s voice reminds me of a young Debbie Harry. Wonderful music, I can only recommend: turn your radio on!”
Wolfgang Flur (ex Kraftwerk)

“Tiny Magnetic Pets are truly amongst the finest electronic bands to have emerged over recent years. Their new album emphasises their deserved respect in this field. Brilliant combinations of retro synth sounds with great songs and production and the female vocals compliment their sound impeccably. Also a cameo performance from the legendary Kraftwerk musician Wolfgang Flur obviously endorses the respect that he has for them. I get a fair amount of requests to write and produce for bands and certainly if I was asked, the Pets would be top of the list.”
Chris Payne (Gary Numan)