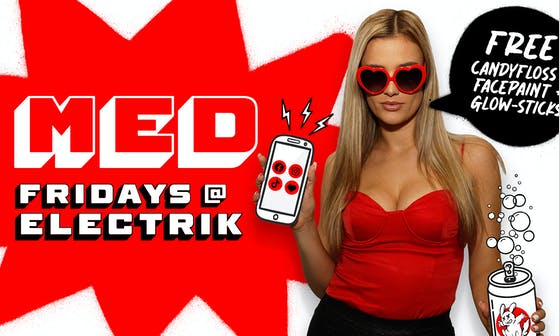 MEDICATION IS LEGENDARY! EVERYBODY KNOWS MED IN LIVERPOOL!

Med is famous for it's huge production in terms of lights, lasers, inflatables, CO2 and confetti as well as 5 floors of music! Always had a massive following with dance heads in Liverpool and was described as an 'Elrow for students' by Live Nation one of the biggest promoters in the world. Radio 1's Danny Howard, a Med regular himself, when he was at Edgehill Uni said it is 'Probably the best student night in the country!'

Calvin Harris, Nelly, Pendulum, Third Party and Danny Howard himself have all played there as well as countless other special guest DJs.

Med was at Cream night club for 20 years but has been at Electrik (old Krazyhouse) in Wood Street for the past 4 years and it has found another great home for the insane nights it puts on! j

Welcome to the mischief, magic and mayhem of Medication!

Fri 23rd Dec at 10:00pm-Sat 24th Dec at 4:00am
ELECTRIK WAREHOUSE, Liverpool
£4 - £5
View past events by MEDICATION LIVERPOOL
Fatsoma uses cookies to give you the best experience. View Privacy Policy