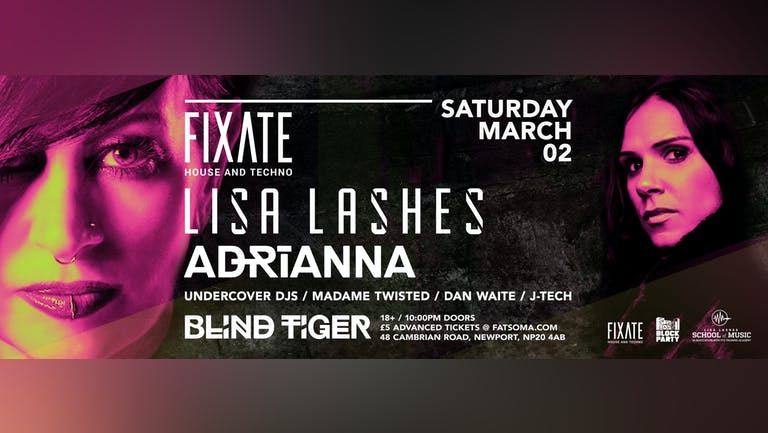 LISA LASHES is no stranger to the biggest events worldwide and a true DJ’s DJ, Lisa’s focus, passion, skill set and presence behind the decks is a force to be reckoned while commanding pure, unfaltering devotion from a huge, loyal worldwide fan base. Lisa dazzles crowds with her tricks, skills and flawless mixing. Never complacent, Lisa thrives on musical perfectionism, continually upping her game, which is why people just can’t get enough of her amazing energy and showmanship behind the decks.

Dividing her time between touring and tireless late night studio hours makes Lisa’s discography an impressive read. Commanding one of the biggest-selling Euphoria albums of all time, her releases span musical genres from Hard Dance to Trance and over the last few years going back to her Techno roots which is creating huge interest in the dance industry with her extensive musical knowledge.

Going forward, Lisa is following her heart to the dark side of Techno and the underground with the support of none other than ‘The Boss’ Carl Cox who heavily supports Lisa’s releases in his DJ sets and his international Global radio show. (Listen)

ADRIANNA developed a love for music and the arts as a little girl. She was heavily interested in experimenting with violin, saxophone, flute and choir so music became very natural in her life.

Adrianna describes her sound as electronic tech-house music fused with vocals that creates a big room sound and feeling. The variation in her genres is a direct reflection of her diverse background and musical experiences.

Adrianna currently lives in the UK but is no stranger to performing internationally at events such as Orgin in Montreal, Coco Bongo in Punta Cana and Cancun, upon also being personally selected by Lisa Lashes to play the Unity of Sound event at Lisa Lashes School of Music in Northampton. (Listen)