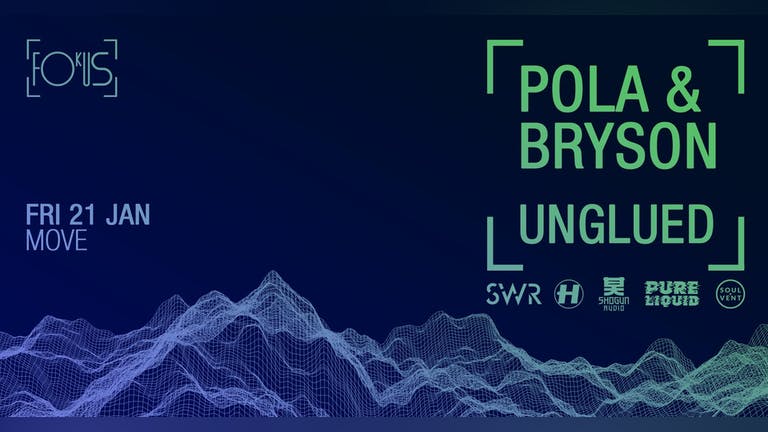 We kick off our 2022 campaign with 2 of the hottest properties in DnB right now.

Pola & Bryson and Unglued head up a special 2 room event with our Fokus residents, plus Room 2 support from our friends at SWR and Pure Liquid.

Liquid Sculptures & Big Boy Rollers – welcome to the world of Jack ‘Pola’ Higgins and Harry Bryson; two young producers leading the charge of the new generation within Drum & Bass. A decisive move to London and the formation of their label Soulvent Records are both decisions that have brought these two mavericks huge acclaim within the scene, and they have tenaciously carved out their own niche within the realms of liquid, rolling and minimal D&B. Infectious records from their back catalogue such as ‘24/7’, ‘Unsaid’ and their collaborative remix of ‘Just Hold On’ with Sub Focus and Wilkinson precede possibly their finest body of work yet- their album ‘Beneath The Surface’, features some future classics and collaborations with industry stalwarts including Hugh Hardie, Strategy and Ruth Royall. And of course, their infamous bootleg of Adam F’s ‘Circles’ which will no doubt rear its head on the night!

UKF said “There’s got to be a catch”. Rene LaVice said “This must be a Break alias”. They were both wrong. As Unglued landed on Hospital Records with the now-notorious ‘Bootstrap Bill’, the DnB scene refused to believe the simple truth – that this was a very fresh artist with a very serious future. Within just 3 years, Unglued has gone from strength to strength, becoming one of the most prominent and respected artists on Hospital Records- no mean feat on a label renowned for bringing talent such as High Contrast, Metrik and Camo & Krooked to the forefront of DnB. Most infamously, his bootleg-turned-remix of High Contrast’s timeless ‘If We Ever’ has become one of the most famed Drum n Bass tunes of the 21st century, still finding its way into headline and support sets alike 3 years later. Other key records include ‘Malware’, his savage collaboration with Phace and ‘Born in ‘94’, a modern jungle roller with MC Conrad.

We at Fokus love bringing the best talent around, alongside our highly talented resident team of DJ's and MC's- and every year you will find us providing the best in DnB at Hijacked Festival. Follow our socials to keep up to date:

Big shows don't run themselves; we are always looking to welcome new faces into our team. If you fancy joining our team and want to enjoy some great perks, or if you are a creative with a serious talent to show, get in touch by emailing morgsdnb@gmail.com