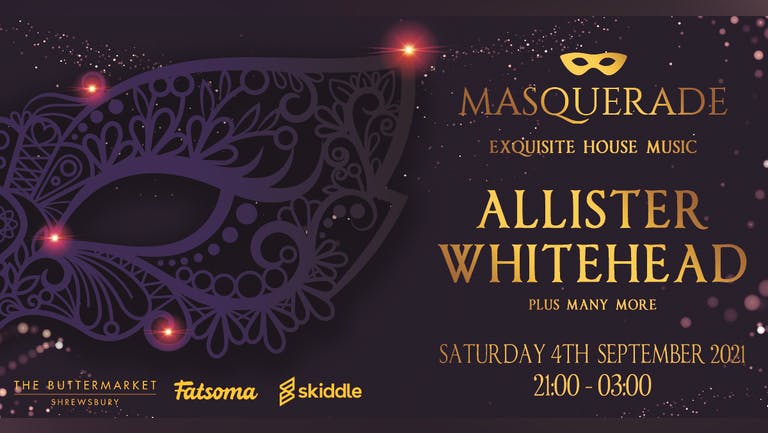 We are thrilled to announce that Masquerade will be back in Shrewsbury late Summer 2021! Following an incredible first event at The Buttermarket in February 2020, our next date was thwarted due to Covid-19, but the party won't be stopped that easily! Join us on Saturday 4th September for another night of exquisite House music featuring one of the UK's most prolific House DJs - Allister Whitehead!

Allister is a name who needs no introduction, his music has inspired and shaped House for 3 decades, with residencies at places such as The Hacienda, Cream, Ministry of Sound & Gatecrasher.

He was truly established as a household name worldwide with the Gold selling Fantazia album 'The House Collection 3' which was then, the biggest selling DJ compilation ever. The floodgates then opened to a new era of compilation sales becoming a dominating component of the dance music industry.

Through working with brands like Clique Exclusive, Retro, Bushwackers, Code7 and many more, Cliffy has built a reputation for always delivering stand out sets. Very prolific on Soundcloud, you will find nothing but beautifully thought out and diverse mixes. Cliffy formed the Organics banner in 2016, and now focuses on nothing but raw house and tech in its truest forms. After a 5 year residency at Shropshire’s biggest club The Buttermarket, he is now focusing on different brands like Masquerade, Party On The Hill, Blossoms Wolverhampton, delivering a variety of flavours of house music to more specialist crowds.

Musician, producer, DJ, , promoter, and electronic music enthusiast, Nimrod Houseproud hails out of Telford, Shropshire. Having spent many years playing at all of the major local night clubs (alongside local hard-hitters and national acts alike), holding multiple residencies, DJing special events and promoting his own shows, Nimrod has had a lot of time to develop his sound. For him, it’s all about mood and a deep, hypnotic groove… playing those tracks that get you tapping your feet and nodding your head without you realising it

Keith AKA K-A-Smallz from Telford starting mixing records in 1993 on Technics 1210 turntables and has not looked back since. “Music became my life”. K-A started playing bars and friends parties building up a reputation around his local town with his style and sound of music. Funky House, Old School Classics, Vocal House, Garage, Jungle and Drum & Bass.

D-Dope (Richard Harman) brings his love of upbeat freaky funk and disco to The Cavern, so expect a fun set from this back room specialist! A regular on the Shrewsbury party scene, D-Dope is known for his cross-genre sets featuring big classics, nu-disco banger, with a few twists and turns along the way!

Over the prevailing 25 years, Dru has drawn influence from a varied musical palette, from Techno to Reggae, Soul to Latin. Still an avid collector, Dru prefers to play vinyl, selecting up front Deep House music, along with original Disco, Funk, Boogie and re-edits of classic cuts. Dru’s sets are deep, blissed out and sun-kissed, preferring more chilled-out back room grooves than big room sounds. Played with integrity and respect for past influences as well as an eye on the future, and a disco sensibility – always interesting, always funky!