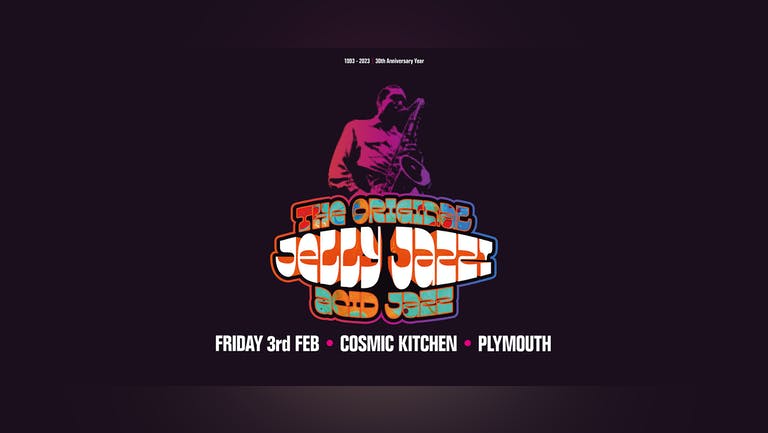 30 years of JELLY JAZZ! 2023 Marks the 30th Anniversary of the legendary JELLY JAZZ and Cosmic sees 4 parties every quater.

Pete Isaac is best known as the DJ promoter behind the seminal southwest club-night Jelly Jazz since January 1993, which saw its 25th Anniversary in 2018, a major milestone for any club night.

In its early days during the height of the southwest’s rave culture, Jelly Jazz started out to provide a weekly diet of soul, funk, latin, hip hop and break-beat all with a jazz twist to them.

The blend worked and the unpretentious, ‘sweat dripping off the walls’, ‘dance till you drop’ attitude and atmosphere driven relentlessly by the musical passion of resident DJ’s Pete Isaac and DJ Griff soon became a major force in Southwest club-culture.

Plus legendary live shows across the southwest from the likes of Pucho & The Latin Soul Brothers, the first ever show in Europe from Sharon Jones & The Dapkings, Blue Note Records legend Lou Donaldson, The New Mastersounds, The Quantic Soul Orchestra, The Bamboos, Sugarman 3, Snowboy and the Latin Section, Manteca, Kokolo Afrobeat Orchestra, Saravah Soul, Ugly Duckling to name a few.

Since early 2015, Pete, along with Bristol DJ Boca 45 set up 45 Live, a celebration of the 7” vinyl format. Comprising of an international crew of DJs that come together in various combinations to play club nights and festivals in the UK and Europe. With some big names in the crew like Jon More (Coldcut), Andy Smith, Marc Hype, DJ Format, DJ Food and world champ DJ Woody, 45 Live has been rocking dancefloors from Newquay to Nice, Bristol to Berlin and beyond.

45 Live Records was born early on too with many releases pressed up so far taking in dancehall, hip hop, soul and breaks from artists including The Nextmen (UK), Aeon Seven (FR), MC Andy Cooper (USA) and Boca 45.

Plus there is the 45 Live Radio Show which Pete and the show’s host Greg Belson coordinate and produce on Dublab in Los Angeles. Playing 100% 7” vinyl, taking in a very wide range of styles from acid house to funk, soul to psyche, it’s a celebration of the 7” single like no other, which saw it as a finalist in the Mixcloud Radio Awards in 2017.

As a DJ, Pete is known for fusing dancefloor jazz, soul, funk, afrobeat and latin cut up and mixed with all their modern derivatives in hip-hop, breakbeat, house and drum and bass. In an era when most club-nights tended to play one genre of music, at one tempo all night, Pete defined himself with variety.

The signature sound is bongos, beats, and bass-lines with scratchy guitars, wholesome horns, and wailing organs.

Above all it’s got to be funky!