This event has already happened! Click here to see upcoming events from INACTION 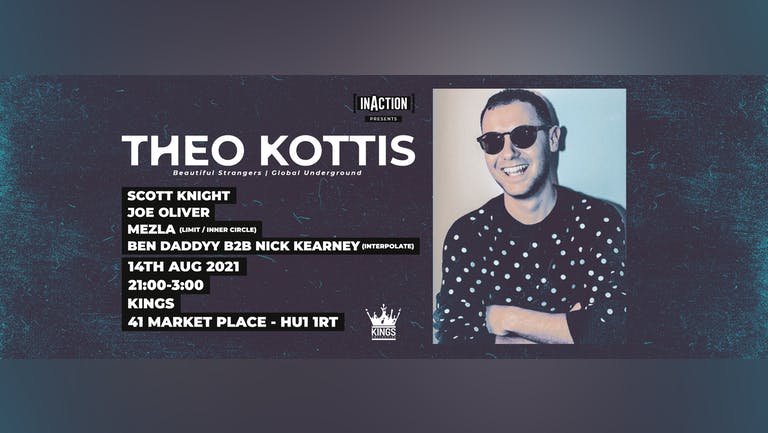 INACTION are back in full swing on August 14th as we welcome our first headliner Theo Kottis to play for our debut event at “KINGS” hulls new live music venue, bar and creative space.

A favorite fixture on the Scottish clubbing circuit, Theo has established himself as one of the UK’s most versatile DJs.

Growing up between Scotland and Greece, Kottis started out as a promoter in Edinburgh while still in his late teens, before subsequently turning his hand to the decks. He’s since held down residencies at Glasgow’s Sub Club and with FLY Club at Cabaret Voltaire in the capital and has built a reputation as a standout DJ both locally and internationally through his ability to adapt his sets to multiple moods and environments.

With a host of impending projects ahead, it seems there’s no stopping Theo Kottis as he heads for the big time. With the release of his own productions, he is consistently tipped by DJ legends around the globe. The shining star among his work is his ‘Beautiful Strangers’ concept that he’s crafted and creatively lead from start to finish; from the music style, production & artwork to the logistical details. He’s successfully built a brand from this, curating his own ‘Beautiful Strangers’ festival alongside Fly Open Air, when Edinburgh Castle set the scene for his line up – featuring heroes Kerri Chandler, Henrik Schwarz, Move D & Hammer.