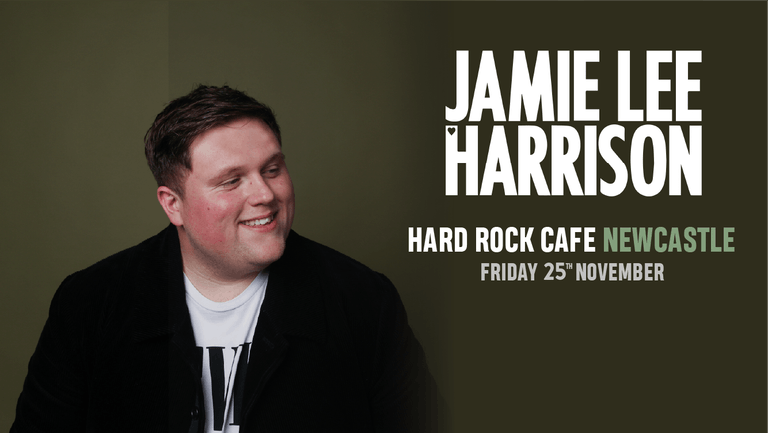 Age restrictions: Under 16s must be accompanied by an adult.
Proper Mint Concerts
64 Followers

Jamie Lee Harrison returns with his live band in a brand new setting, for the first ever original gig to be at Hard Rock Cafe Newcastle.

Join Jamie and his guests for a show which is to be truly special; limited tickets available.

Born and raised in Newcastle, Jamie is a popular part of the North East music scene. From years of developing his melodic sound and purposeful songwriting, he has steadily grown a following of people passionate for genuine music performed from the heart. An incredible 2017 saw Jamie performing on live national TV to completing his own headline tour. His self released track ‘Reflection’ raising awareness on mental health, received huge praise online.

”His thoughtfully crafted lyrics are devastatingly moving and relatable to anyone who has ever felt the way he has felt.” - When The Horn Blows

“In a landscape of often talentless artists, Jamie sticks out as a shining beacon of pure, undeniable talent. And it deserves to be recognised.” - Gigs North East

Despite a difficult year for the music industry, Harrison was invited to open for Ronan Keating at Virgin Money's first outdoor socially distanced arena. Following this, Jamie opened for Becky Hill and Joel Correy at Times Square Newcastle. Jamie’s music is soulful, telling stories of both joy and heartbreak driven from real life experiences. His innate charm makes him immensely likeable.

Be the first to hear the new releases live at Hard Rock Cafe.

Under 16s must be accompanied by an adult.

This is a ticketed show and Hard Rock Cafe will be closed to non ticket holders during the show.