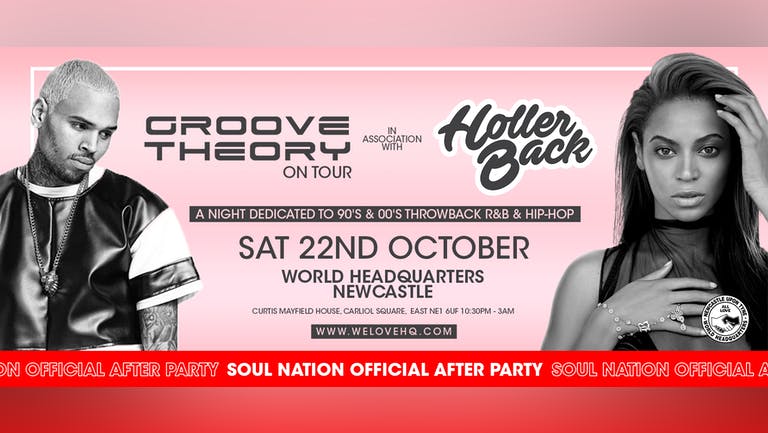 Straight after the Trevor Nelson Soul Nation Newcastle party that finishes at midnight, we have decided to throw an after-party for those of you that want to party longer and are lovers of 90s/00s RnB and Hip-Hop.

And to give you a strictly 90s&00s experience we have teamed up with the Groove Theory crew, Scotland's premier old-school Hip-Hop & RnB party alongside Hollerback, one of London’s favourite throwback old-school Hip-Hop & RnB club nights, to bring Newcastle a very special old-school party playing the finest Hip-Hop & RnB from the 90s, naughties & the teens reminiscent of the legendary Trevor Nelson Lick parties at Temple Theatre in Glasgow and Legends & Foundation in Newcastle, and the big Lovedough events at Ikon & Diva from back in the day!

To add the right feel of nostalgia and to give you that authentic late 90s and naughties feel of RnB in the Toon we have special guest dj WAYNE C MCDONALD who used to play at the legendary Julies, as well as Legends and Sugar, playing alongside Groove Theory founder and resident DJ Naeem, and Hanif from Hollerback / Soul Nation!

Expect to hear everything from Blackstreet to SWV, from Destinys Child to Donell Jones, to Biggie & 2Pac, from Nelly to Tweet, and everything else that was HUGE in the RnB and Hip-Hop clubs in the 90s & 00s...

PLS NOTE Trevor Nelson will not be doing at this event