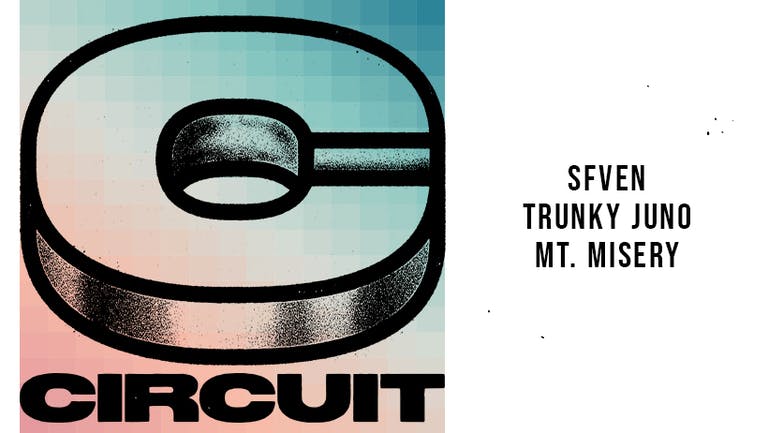 Age restrictions: All ages (U18s must be accompanied by an adult)
INDEPENDENT - SUNDERLAND
2589 Followers

Independent proudly presents Circuit, Sunderland's freshest gig night introducing the best new bands with talents from across the UK and the world alongside some of the most exciting acts from the North East region.

Sfven is a unique and compelling artist. His music communicates intimacy and insecurity with an ambitious and wide-reaching multi-layered sound, whilst his visual identity and onstage persona reflect an affable and laid-back character with hidden depths and a love of the unsophisticated and raw.

Whilst spending most of his years in Leeds collaborating with friends from college, Sfven signed to 3 Beat Records and set out writing his debut album from the Scottish Highlands last year. With a charity-shop nylon-string guitar, bass, laptop, upright piano and a vintage cassette recorder Sfven created ‘forest ave’; an exquisite coming-of-age record that tells a compelling and beautiful story of falling in love with his best friend during the process. The glowing collection of songs evokes the soft-rough sonics of To Emma-era Bon Iver, Golden Vessel’s playful electro-pop, and the emotional openness of Adrienne Lenker’s delicate songs LP.

Behind a well-established moustache and deadpan inclinations, North Eastern indie maverick Trunky Juno resides within his own sphere of off-kilter artistry. Known for his masterful lyricism, warped sounds and bold ideations, the Durham native brings a spritely disposition to the alternative music scene, twisting the mundane into something entertaining. Now backed by a diverse and relatable repertoire, the zany universe of Trunky Juno is beginning its glorious expansion.

Hartlepool indie-pop trio Mt. Misery released their debut album 'Once Home, No Longer' via Prefect Records (Ex-Void, The Natvral, EggS) in summer 2021, alongside a long-since sold-out limited edition Rough Trade Exclusive vinyl. A new EP supported by the PRS Foundation’s ‘Open Fund’ will be released in August 2022, preceded by brand new single ‘Spinning Top’. The band’s sound reflects a timeless but beautiful heartbreak for fans of Real Estate, Whitney and Alvvays, but under the surface, there is a mature determination to succeed that can only be cultivated in the working-class environs of a northern town.