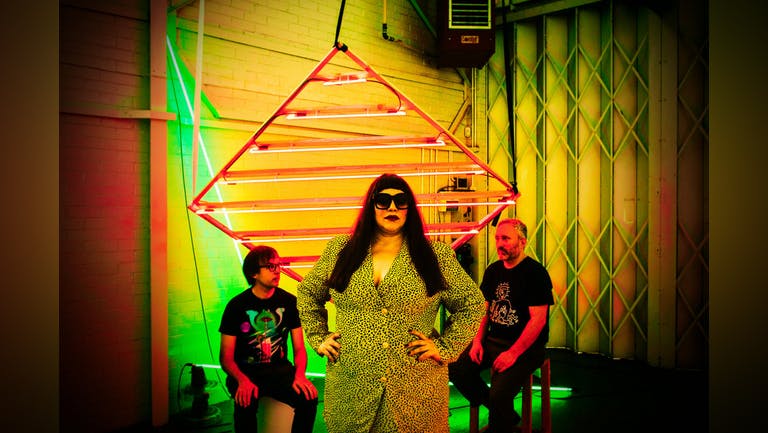 Galaxians are a party band par excellence. Acts from dancefloors past and present are recalled in Galaxians’ boogie-house style, from the peerless early output of the TRAX and Sleeping Bag labels to punk-funk standard-bearers Liquid Liquid and more recent acts such as Metro Area and STR4TA.

Galaxians formed in 2012 when Matt Woodward and Jed Skinner moved to form a group that updated the sounds of the 80s dancefloor for the modern age. The pair soon emerged with EP releases on New York's Dither Down Records and Atlanta label Rotating Souls and three self-organised UK/EU tours between 2013 and 2015.

A significant development in the band’s style came with the addition of singer Emma Mason in 2016, whose powerhouse vocals and commanding presence lit up the band’s 2017 debut album Let The Rhythm In.

The album caught the attention of the national music press - Clash Magazine described the album as ‘[a] tour de force of exuberant club energy’ while the Huffington Post labelled it ‘dazzling’. The single 'How Do U Feel?' was also featured on Stuart Maconie's show on BBC 6 Music and on Radio 2. A remix of the single also appeared on award-winning label Future Disco's Technicolour Nights compilation album; Lauren Laverne's compilation of the week in May 2019.
For their self-released second album, Chemical Reaction (2020), part-funded by Help Musicians UK’s Do it Differently fund, Galaxians stripped back the music and pumped up the vocals. Emma Mason's unstoppable voice elevates the group to a fully formed musical act. Clash again took the lead on the album, describing it as '[a] storming, potent, extremely direct return', whilst MOJO and NARC magazine gave the album 4/5 and 5/5 reviews respectively.
The band collaborated with dancer and mother of Manchester's House of Ghetto, Darren Pritchard, and renowned documentary filmmaker Clare Tavernor on the video for the album's title track. It is to date the band's most complete and considered work, and their fastest-selling release.
Galaxians live profile has continued to grow from their album successes, with festival appearances at Amsterdam Dance Event, Bluedot, Dimensions, Beat-Herder, Port Eliot, Long Division, and Tramlines, plus support slots for the likes of Tom Tom Club, Dam Funk, and ESG.
Seven years on from those early gigs and Galaxians retain sight of the principles that make their output, and dance music as a whole, so vital - commonality of experience, singular moments shared by a crowd, and rhythm as the best medicine.