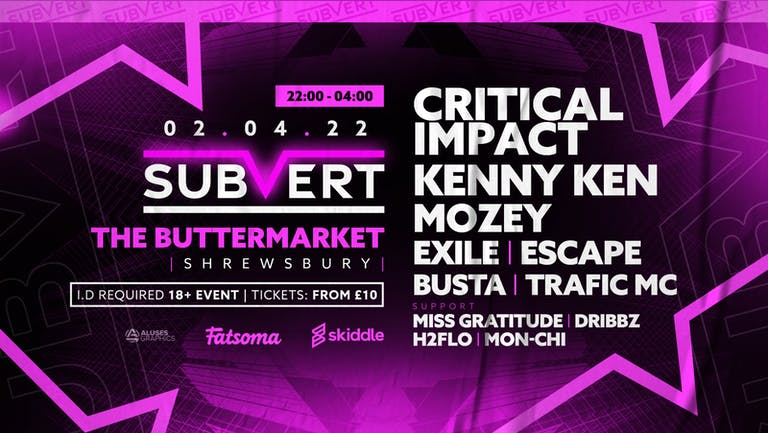 This April we celebrate 4 years of Subvert and what better way than bringing 4 incredibly different artists to town! 🥳

Critical Impact, of "Creeper" fame alongside Break & Skibadee, one of D&B's longstanding greats and junglist legend Kenny Ken, Mozey - one of the leaders of the new wave of Jump Up taking the nation by storm under Souped Up Records and finally Exile, an impeccable producer known for his work alongside names such as Mark XTC.

Joining them will be Subvert residents Escape & Busta and for his Subvert debut, Trafic MC! Supporting on the night we have Miss Gratitude from Shropshire based Seshlehem and our usual resident MC's, Dribbz, Mon-Chi and H2Flo.

The Buttermarket Cellars are Shropshire's leading underground (literally!) venue, boasting a 30k Funktion 1 sound system and a network of brick arches throughout, its ideal for heavy sub bass! The Venue has over 20 years history hosting Drum & Bass events with some of the biggest names in the scene.

Both Shrewsbury train station and a new. Premier Inn are only a 2 minute walk away.