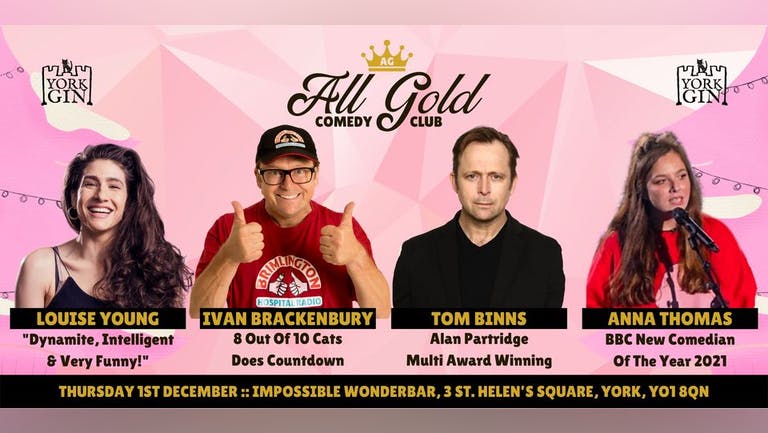 Join us at Impossible York with York Gin for another stunning night of stand up and our festive feast of funny Christmas special!Resident MC Louise Young introduces...Ivan Brackenbury
A daft, inept yet adorable radio DJ takes you on a hilarious broadcasting journey. This is a unique, wonderfully brilliant show, guaranteed to make you cry with laughter 'Audiences are laughing their heads off' - MetroHe's been nominated for the Edinburgh Comedy Award, Trident Comedy Award and Perth International Fringe Comedy Award (twice). He's was voted a ‘Fosters Comedy God’, he's won Best International Act at the New Zealand International Comedy Festival, Adelaide Fringe (twice), Nottingham International Comedy Festival and 3 Sony Gold Awards.He's been in BBC Shows Alan Partridge, Lee and Herring, Friday/Saturday Night Armistice and Channel 4 shows IT Crowd, The Big Breakfast, Ri:se, Under the Moon, Drifters and Eight out of Ten Cats do Countdown and the feature films Going to Mecca and Eaten by Lions.Tom Binns
Multi award winning comedian Tom Binns has performed his ‘Psychic’ Character Ian D Montfort to 5 star reviews around The World and in the smash hit British film "Eaten by Lions"He’s entertained and amazed skeptics and believers alike on his own BBC Radio 2 series ‘Ian D Montfort is: Unbelievable’ and his critically acclaimed BBC 1 Friday night series Hospital People .During this time Tom claims to have discovered a genuine 'psychic' ability and now performs as The ‘Psychic’ Comedium. In his performances Tom clearly makes jaw dropping revelations about his audience but is he gifted or is he deluded or is he just full of shit?Whatever you decide his gift for comedy is undeniable and his 'psychic' powers are unbelievable!Anna Thomas
“Welshwoman Anna Thomas exudes a convivial daftness, she’s an odd fish, that’s for sure, but owns it…distinctive rhythms and charmingly dotty attitude that wins our affections”– Chortle“Welsh starlet, Anna is the breakthrough act of the moment and highly touted for a successful career in comedy. Comparisons with fellow Welsh comic, Rhod Gilbert don’t end with their accents; Anna’s delightfully grumpy and gruff delivery leaves audiences belly laughing”– Punch Drunk Comedy“Super refreshing and original in an often comedy sea of beige… one of them with funny bones she is.”– Barking Tales
With lineups as good as ours we very often sell out. Snap up your tickets early!