This event has already happened! Click here to see upcoming events from Timepiece 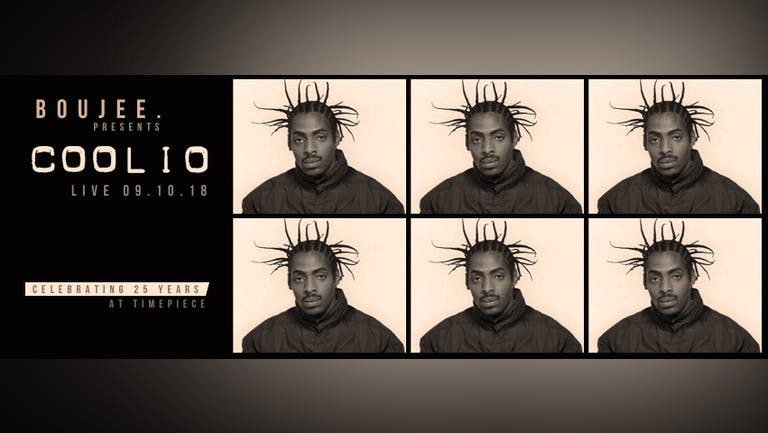 Coolio initially took over the world rap scene through the “Gangsta’s Paradise” release, which won a Grammy in 1996 for Best Rap Performance, Solo. “Gangsta’s Paradise” would also be featured on the “Dangerous Minds” soundtrack and movie.  “Gangsta’s Paradise,” also featuring L.V. on vocals, was also nominated for a Grammy for Best Song of the Year. It sold over six million copies and was Billboard Magazine’s number one single in 1995.
The world recognition led to his music being featured Coolio for several major motion pictures including: “Space Jam,” “Clueless,” “The Big Payback,” “Panther,” “New Jersey Drive,” “The Jerk Boys,” “Eddie,” “Half Baked” and many more.  He also composed the theme song for the popular TV series “Kenan and Kel” on Nickelodeon.
The awards for his hard-hitting style are many. Coolio has won an American Music Award, three MTV awards, two Nickelodeon Kids’ Choice Awards and a World Music Award.  He has received six Grammy nominations (1994, 1995 and 1996), two Billboard Music Awards (1994 and 1996), two ASCAP awards (1996, 1997), four American Online awards (1996) and was the Playboy Music Poll winner in 1997. In 2016, Coolio won a Vintage Soundtrack Song of 1995 award for “Gangsta’s Paradise” from “Dangerous Minds” via the Vintage Film Awards.

Performing a live club PA at Timepiece to celebrate our 25th Year, we moved in to the current premisses the same year that Coolio had a No.1 Grammy award winning smash hit with Gangsta's Paradise so we felt this was the time for Coolio to fly over and perform this at Timepiece, live.