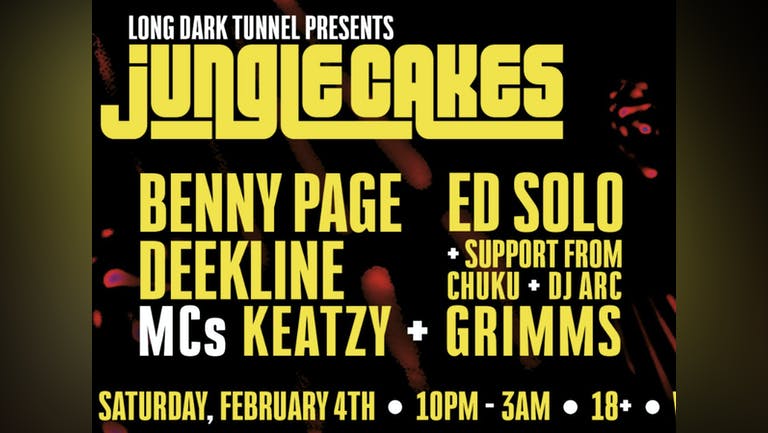 BENNY PAGE:
Sitting in state at the apex of jungle and DnB is the mighty Benny Page, an artist who has played a definitive role in shaping the UK’s underground movement, and long ago joined British soundsystem culture’s royal family.
Blasting onto the scene with his 2006 anthem ‘Turn Down The Lights’ Benny then released a slew of seminal ragga jungle cuts, as well as numerous well received productions across other areas of the dance music spectrum. Having cut his teeth on the Digital Soundboy imprint, he has gone on to collaborate with some of the most exciting producers and vocalists in the industry, from MC Spyda, Topcat and Sweetie Irie to Jessie J, Tinnie Tempah, Misha B, Arlisa & Nas, as well as taking his blazing brand ft of dubwise DnB to audiences across the globe. His remix collaboration with Congo Natty on "UK Allstars" remains an enduring modern classic of the UK underground.
Benny has been a fixture at Boomtown Festival for the best part of a decade and is a central figure in the Jungle Cakes collective of artists. The birth of his label Dubshotta in 2016, with a debut EP from Benny himself, saw the artist receive a whole lot of love from the likes of DJ Target and 1 Xtra, and he’s been ever-present on the airwaves ever since.
In 2021, his collab with Origin8a & Propa, 'Harmony', was a global hit with more than 300 plays on the UK's Radio 1. A new album is due for release in early 2023.
---
ED SOLO:
Firing up the bassbins and hitting you hard with a dose of raggamuffin junglist energy is what Ed Solo is all about. From Glastonbury to Canada's Shambhala, from dirty Brixton back rooms to Spanish arenas, Ed has travelled the globe throwing down his unique brand of ruffneck bassline bravado for more than a decade.
Ed's knack for the rudest of hooks is equalled only by his sublime studio skills. He cut his teeth in the mid '90s engineering at the notorious SOUR Records studios, going on to lay down a series of groundbreaking collaborations with jungle kingpin DJ Brockie. In 2007 Ed released ‘Random Acts of Kindness’ alongside Skool of Thought, featuring ‘When I Was A Yout’ and ‘We Play The Music’ among others.
Ed’s partnership with Jungle Cakes partner in crime Deekline has thrown up some of the most memorable tunes of the decade. The pair recently mixed the chart-topping 8th edition of their Welcome to the Jungle series and have formed the incredibly successful Jungle Cakes Takeover collective with the likes of Benny Page and Serial Killaz.
---
DEEKLINE:
Deekline is that rare figure in dance music, the seminal producer who balances the cutting edge and the mainstream with effortless flair. Boss man chief of the Hot Cakes/Jungle Cakes collective of producers, promoters and DJs, this bonafide bass music icon is currently experiencing a new lease of life as a legendary figure to a new generation of jungle, bass and garage artists.
Tracks such as Got to Believe, Deepa and jungle anthem Good to Have the Feelin, with the legendary Tippa Irie, have picked up play and support from DJs such as MistaJam and Annie Mac, on Radio 1 and 1Xtra. His collaboration with General Levy and Ed Solo, Have Some Fun, was also a massive hit on the airwaves.
In the studio, Deekline is a bonafide musical shapeshifter, his impressive diversity having seen him rework the likes of Armand Van Helden, Old Dirty Bastard and The Prodigy. His landmark, chart-topping Welcome to the Jungle mix series on Jungle Cakes has just reached its eighth volume, and upcoming projects include a new artist album alongside Specimen A, plus a big hand in the forthcoming Jungle Cakes x Trojan Records remix project.