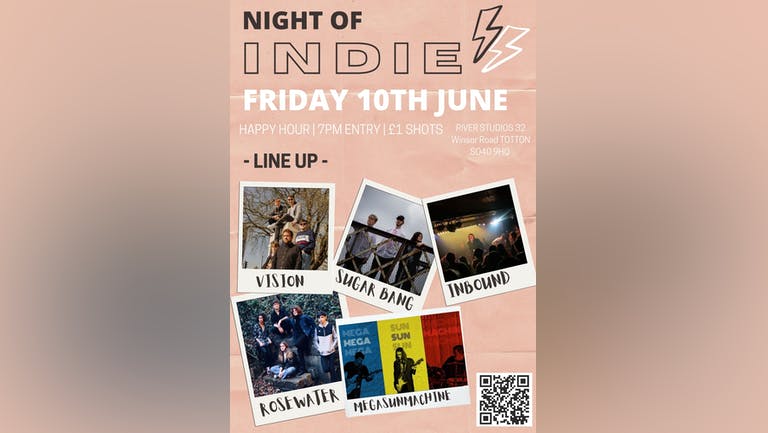 Vision are a 5 piece Indie Rock band based in Southampton formed in 2018 with frontman Rich and guitarist Tom with Brogan on bass, Bailey on drums and Alfie on guitar! Influences include Oasis, The Beatles, Arctic Monkeys, Sex Pistols, Led Zeppelin and David Bowie.

Sugar Bang, originating from the south coast, sugar bang! Are a three-piece indie band based in Southampton, they play a back to basics style of indie music with fascinating three-piece harmonies Involved, founding members include, Mckenzie Barrass and guitar and lead vocals, Maisy Collins on bass and lead vocals and finally Joshua Walker on the drums.

Inbound are a 5 piece indie/alt rock band that originated from solent university when all members met each other during their studies at the university. taking inspiration from bands such as Wolf Alice, Royal Blood and Frank Carter and the Rattlesnakes, they incorporate all of the melodic harmonies of a heavy track as well as softer lines to balance out their techniques with help of a powerful vocal.

Rosewater  are a  5 piece indie/rock band from Stubbington. Playing covers and writing original songs and music. Playing festivals, charity events, battle of the bands and open mic nights around Hampshire.