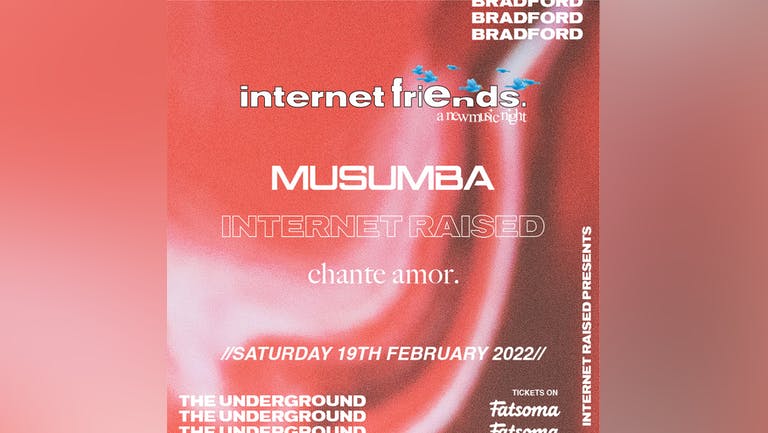 A new music night celebrating some of the finest fresh talents.

We are really excited to be presenting the first ever 'Internet Friends', the first event will take place in Bradford at the Underground on Saturday 19th of February.

We have a fantastic line up in store for you, including:

Musumba is the new name weaving itself through the music scene, both locally and internationally. Her poetic stories of life, faith and purpose, intertwined with soulful runs and punchy rap styles, effortlessly immerse her listeners in a kaleidoscope of her own ambient production.

At just 18 years of age, the Bradford raised, Congolese songwriter has proven her place as a true artist; having been playlisted on BBC Radio 1 and Radio 6, appearing at London’s BBC introducing live and opening Manchester’s ‘See My World’ Festival, showcased alongside the likes of WSTRN, Misha B, Juls and Dreya Mac. As well as exhibiting her talents on multiple stages through a number of exceptional live performances in 2021, Musumba also released her debut EP ‘2:40’ at the start of the year. She later followed it up in October with her captivating ‘Distant Demos’  project, boasting three unfinished yet powerful songs, collating over 200,000 streams across a variety of digital streaming platforms.

After stirring up the game a little, Musumba is just getting started. With her debut headline show rounding off an eventful year, she set the bar with an intimate, memorable performance, ready to take on new heights in 2022.

The members Oliver Pinder (21, from Wakefield) and Vanessa Maria (27, from Manchester) were both raised in Bradford, West Yorkshire, and have shared a strong passion for singing and songwriting from young ages.

‘Internet Raised’ derives from the idea of how our youth today look up to and are influenced by a third parent - the Internet. All of their songs are predominantly based on the concepts and themes of love, loss and growing, as well as the experimenting and improving yourself.

The duo’s name came from a poignant lyric in ‘A World Alone’ from Lorde debut album ‘Pure Heroine’; an artist whom is a large inspiration to the duo. They are heavily inspired by artists such as Lauv for his upbeat pop anthems, MUNA for their dark undertones and Jeremy Zucker for his darker bedroom-pop vibes.

In mid-2020, the duo took some original demos to James Kenosha, an illustrious Producer, known for his works with Birdy and Rhodes, and expanding on Oliver’s existing production.

Throughout 2021, they released 3 singles ‘Better’, ’Burning Sheets’ and ’7 Wonders’, played their first ever headline show selling out 2 hometown shows in Leeds and played a number of gigs.

The duo are gearing up for a big 2022, with plans of an EP to be released later in the year.

"The Duo garner a striking synergy, particularly in regards to their vocals, with their tenderly candid delivery creating a harmonious yin to yang" Earmilk

"a dose of sonic sunshine" Notion

"A sparkling debut from an authentic duo, we think 'Internet Raised' are here to stay." Gig Soup